Has Been Heroes (Switch) - Ramblin' Review 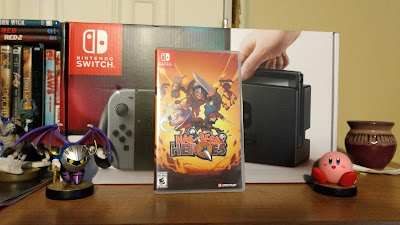 For those wanting to read the review, skip down a few paragraphs.

Today was the first day in a long while in which I had actually planned out what I was going to do for myself. As a result, it turned into a complete disaster.

First, I set an alarm for myself to be up at 10:30, so that I could get a few hours sleep after my night shift. Then, I would go to Gamestop to pick up Has- Been Heroes, come home, play game, write review, lay back down for a nap, get up for dinner with family, get ready for work, go to work.

What actually happened? I started power snoozing my alarm since my body wasn't accepting four hours of sleep very well. I finally roll out of bed almost an hour later. That's not too bad, still have a bit of time to take care of everything before the family gets home. Grabbed a quick snack, hopped in the truck, stopped and got coffee at a local gas station(it works in a pinch). I got on the freeway, got off at my exit...and then my truck stopped wanting to go into gear while sitting in the left turn lane.

After about 10-15 minutes of waving people around me and trying to figure out who I could call at that time of day to help me, a kind motorist pulled over and offered to help. After pushing my truck to a safe location, I thanked him and he was on his way. I then milled about my truck for about 10 minutes before deciding that I needed to just walk the last five minutes to Gamestop to get my game.

So, I called my wife, got a hold of the insurance company, and set to walking. Went into Gamestop, grabbed my game, and ended up in a five minute conversation with the employee on duty about how much we had been enjoying our Switch consoles.

I walk back to my truck, and ten minutes later the tow truck gets there and whisks me home.

Finally...time for the game!
(I really should have just brought my Switch with me).


I didn't really know what to expect from Has Been Heroes. I'm not familiar with the developer at all, and the game play videos weren't making it very clear what the game was actually about, or played like. Going in blind made the journey so much sweeter, but it came with a learning curve. As such, I feel that we really need to dive into the controls first.

Has- Been Heroes is a strategy game, and works with a console controller very well for a game that feels and looks like it should have been on PC.
You have three lanes, each with it's own hero in it. Each lane is assigned one of the left face buttons(in the case of the Switch version,...
X = top lane
Y = middle lane
B = bottom lane.

Getting used to the controls isn't difficult, but it sometimes leads to situations at the beginning that will lead to mis- pressed buttons and fatal mistakes as a result. This isn't as huge of an issue as it can be in other games, but it is advised to try to familiarize yourself as much as possible and utilize the pause button often.

Combat is pretty straight-forward- select which hero you want by picking the lane that they're in and pressing the appropriate button, then press A. your hero will attack. You will then have to wait until their fatigue meter fills back up for their next turn.
Where the combat becomes a bit more interesting, is that you can switch heroes between lanes as need be.
For example- if you only have an enemy in the top lane, you can press X to activate that lane's current hero, attack with A, then press Y, and then X(or B and then X) to switch the hero from the respective lane to the X lane. You then press the lane button again(in this example, X) to activate that hero and press A to attack.

Remember how I said that I didn't really know what to expect from this game?
Well, after playing it for a bit, I can tell you exactly what to expect- Plants vs. Zombies in a light-hearted fantasy world.
Like other rogue-likes, you get upgrades and unlock new items and power-ups as you progress through the game.
The controls take a bit of getting used to, something that I cannot emphasize enough, but once they click they feel fairly natural. The game's difficulty comes from lane management, as the death of one hero is failure for the whole campaign.

Has Been Heroes has a little bit of a learning curve, and some light humor to bring in a bit charm. It's not the best indie I've played, but it's a fun game to play, highly addictive, and well worth the $20 price tag.