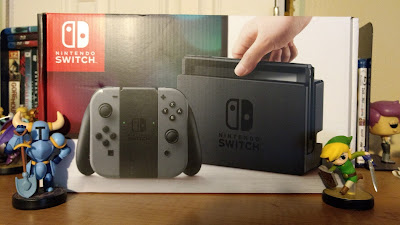 I got my Nintendo Switch day one.
After following rumors for nearly two years, and obsessing over every little detail and speculation(to the point where I scored a guest spot on my favorite Nintendo-themed podcast concerning exactly that!!), Nintendo finally gave us a taste of what we could expect this past October.

After that little tease, they finally gave us more information. Through a disastrous live presentation highlighting what exactly the system was, and it's capabilities, I was hooked. Not because of the presentation, obviously, but because getting to see the system in action and the subsequently released trailers for confirmed games.

I immediately jumped on to Amazon to place my pre-order, clicking refresh like it was giving me money for every click. It finally opened up, and I was probably one of the first people to get it into my cart. At least, that is how it felt.  I was like an excited kid finally getting that shiny new bike that they had been pining over for months. Christmas in January(well, March, since I'd still have to wait another 7 weeks until the console actually arrived).

On that note, I'll back it up a little bit and give you some history.
After watching the initial reveal trailer, I introduced my daughters to the new Nintendo console through the same. While my middle and little were excited about the prospective new toy, my eldest was ecstatic. Maybe even more than I was.
Every week she would ask me which games were going to be coming, and when we would get it. Would it be there for Christmas? For her birthday(in January)?

I had to tell her, that no, we would find out more in January. After the first few weeks of this, and this depressing reminder, she finally pushed it to the back of her mind and reserved herself, just as I had, to the fact that this new console was probably months away.

Christmas came and went, and while it was a good haul for all, the real prize that my eldest and I coveted was still about three weeks from being revealed.

So, Switchmas, as we all seemed to be referring to it at this point, was revealed to be January 12th(in the United states, January 13th in Japan)!!!
I work night shift, and the presentation was scheduled to begin at the same time as my shift. So, while I didn't get the first break that I had hoped for to watch the beginning of the presentation, I did give my buddy the nod to spoil any info revealed while I was working. I lucked into a break one half hour into my shift, and as such got to witness the train wreck that was the second half of the event. Don't get me wrong, the games revealed and price point were all that I expected and more, but the execution was lacking. That's alright, though, the important part was the reveal of a release date(March 3rd), and that preorders would go live that evening.
As I mentioned before, every break I had was spent camping out hitting the refresh button. Luckily, I only had to do that for two breaks before I hit gold and got my preorder locked in for the console, Zelda, Bomberman, and Skylanders (for my kids, and partially to convince my wife that this wasn't just for me).

I actually woke up early the next day to let my daughters know(especially my eldest), that I had preordered the switch, and she would have it day one to play Skylanders with her sisters(and myself).

The wait for both of us was excruciating,and every day her and I(and a buddy of mine, Mark, whom I'll talk a bit more about in part 2, started a daily countdown leading up to release day...31 days in advance.
The last few days became especially worrisome(though I hid this from my eldest), because it didn't look like anything was going to arrive on time!
Wednesday came and went with no notification that shipping had begun, and there were people in Hawaii they already had their units!
I was really jealous, and starting to get paranoid.
Finally, on Thursday (march 2nd), I got the email that everything was being prepared, and was expected to arrive by 8 p.m. the following day.
With butterflies in my stomach, I went to work and tried to stymie my child-like glee...


That, is where I will leave you all hanging. Click here for Part Two!!