A Rose in the Twilight (Vita) - Ramblin' Review 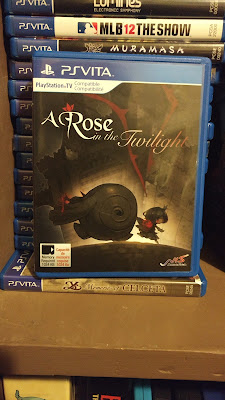 When I first dove into A Rose in the Twilight, I was immediately taken back by the art style. It is simple, clean, but absolutely gorgeous. Much like Limbo before it, we have a puzzle platformer that uses a limited color palette to express it's gloomy and oppressive world. While Limbo stuck with black, white, and various shades of gray, A Rose in the Twilight adds in sepia and vibrant red to make itself immediately stand out from it's quite similar western counterpart. However, it is not merely the art style and color choices that bring this world to life, it is the music. Beautiful compositions that alternate and blend Victorian era classical sonatas alongside ambient electronica.

Fortunately for us, though, this game isn't just about creating an oppressive atmosphere and presenting us with beautiful visuals, it also comes through with providing a varied and satisfying gameplay experience that should please genre die-hards, but without being too frustrating for newcomers. 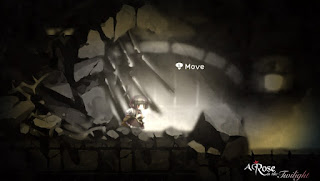 The controls are precise, and intuitive. They're explained in pop-up menus as you need to know them, as seen above. They do, however, require a small period of adjustment. Why is that? Simply because your walking speed is barely above a tiptoe, and you can only jump high enough to clear the tallest of step stools. This is completely on purpose, as it serves as the impetus for learning how to manipulate your environment, and soon enough into the game, the Giant to overcome your obstacles and progress through the dungeons.
One of the more interesting parts of the game is that Giant can throw Rose as a means of clearing platforms otherwise too tall, and if you misjudge the throw, you can end up killing yourself in the process. 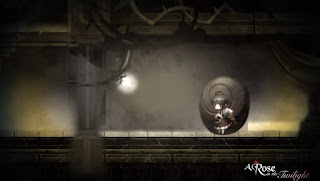 Difficulty curves nicely, as they start off glaringly simple to teach you the basic mechanics of the game, and slowly become more difficult as you make your way through the game. Most satisfying, however, is that when you finally figure out a particularly tough puzzle, you feel accomplished. You will face some deaths that feel cheap early on, but that will usually be due to learning your own limitations on drops and misjudging distances between gaps.
I also found myself solving puzzles after many failed attempts and realized after that it should not have been as hard as it was, but I was overthinking it.
Switching between Rose and Giant is smooth, and you quickly learn which you should be controlling and for what reasons. Rose is the only one that can transfer blood between objects, and a very important lesson is learning when to store blood to move on and when to leave it behind. Giant can pick up Rose, throw her, and doesn't get harmed by environmental dangers like Rose. 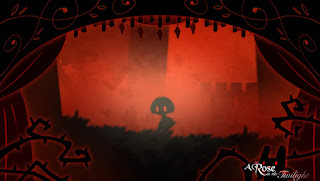 While puzzle platformers aren't generally expected to provide the most intriguing of narratives, A Rose in the Twilight does a great job of slowly letting out little hints here and there in the form of scrolls and blood memories to push the story forward.
Most of it is helping you become more well- acquainted with the mechanics without the need for a specific tutorial section. Keeps things nice and clean, and the journal format is a nice distraction from when your solutions aren't immediately obvious. 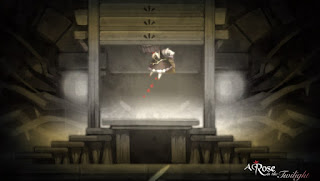 The game doesn't innovate or improve a genre that tends to be well-loved or dismissed. but it's well executed and the world is stunning.
I found it a perfect match for the Vita, although the game is also available on Steam.

All screenshots were taken with my Vita.
platformer puzzle Reviews Vita