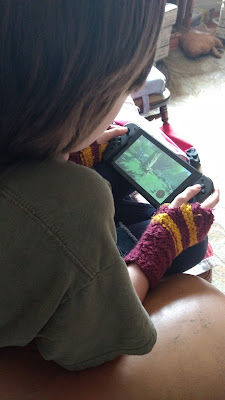 (Click Here if you Haven't Read Part One Yet)
So, I finished my shift at work and went home, going to sleep earlier than usual with my alarm set for 11:30 AM later that day.
Even with my excitement over the pending arrival of the Switch, I managed to snooze through my alarm for a good half-hour.

I picked up my phone to turn off the last alarm, and squinted through reading my emails looking for a delivery confirmation.
I didn't find one, and so I actually called out to my kids to ask if it had come yet.
A disappointed "No" was quickly followed up by a recounting of the morning's events and whether or not I needed my middle to bring me coffee. Of course I needed coffee.

It wasn't an hour before the Switch was dropped on the front porch, and I had not even noticed. The mail lady pulled up to deliver the mail(the Switch having come via UPS), and I got a notification email that the package had been delivered!
I sent my eldest out to get the mail(which contained Bomberman-a pleasant surprise, considering the expected delivery date was march 7-10th) but first I grabbed the box from Amazon and brought it inside. When she got back inside, I told them that I was letting them open up the package.

I recorded this and sent it to my wife and a few friends(I won't be posting that video here for the sake of their privacy), and watching the glee on their faces while ripping the outer box open to discover the Switch and Skylanders starter pack within made me remember being a kid at Christmas, opening up my brand new console, all over again.

At that moment, I knew that this had to be about them, not me. I messaged Mark, and told him as such.
"Today is about them. I'll get plenty of time with the console. I'm just going to sit back and watch them go."

So, while I set the console up and linked my console to my "my nintendo" account, I immediately put in Skylanders, turned the joycon into two controllers, and handed it off to them. 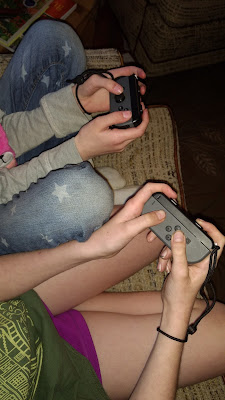 I made myself another cup of coffee, and got comfortable in my chair. I spent the next two hours observing. They puzzled their way through how to scan in their Skylanders, how to take screenshots, and even how to sync the controllers and reconfigure them back into one controller.
This is why I insisted on getting the console day one.
While I initially wanted the console for myself, Nintendo finally succeeded in their marketing for this new console. They sold it as a home console that you could take with you to play anywhere. Not only that, they put a really heavy emphasis on this being a multiplayer console. There was a big emphasis put on getting out there and making video games something you did with your real life friends and acquaintances again. It wasn't just about playing alone, or online. Nintendo wasn't just trying to capture the casual audience that they had with the Wii, they were bringing back everyone that grew up playing on Nintendo consoles with their friends and family. The people that haven't even owned a console in the last 15 years.
They got them excited to play video games again. They did that by making all of us adults feel like kids again.
So, what better way to look at the Nintendo Switch, than by looking at it through the eyes of a child?

My eldest, as I mentioned before, was the most excited in my household. That's her at the top playing on her own Zelda save file.
She loved the Switch so much, that she adjusted her life around getting to play on it. She got up early to get all of her chores done. She became more patient in working with her sisters to teach them how to play the games properly or more effectively.
She willingly gave up her own turn to play the games so she wouldn't be perceived as being selfish with her play time. That resulted in my wife  expressing her appreciation of the purchase. The excitement has waned a bit over the last month, but she has still maintained her patience in playing with others. She is still very excited about bringing friends over to enjoy the Switch with her because they don't have one.
Did I mention the patience she has improved upon above? That's good. She needed it. Why? We bought snipperclips about a week after obtaining the system, and my middle's favorite way to play this charming and, at times, frustrating puzzle game, is to make it even more frustrating... for her older sister. She delights in running out of the room to blindly control her papery avatar, much to the chagrin and groans of a sister that only recently became so tolerant of such malign intent. 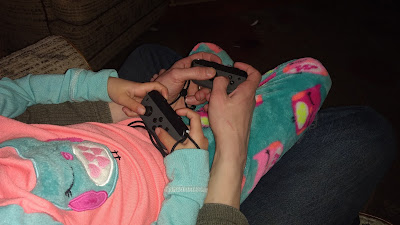 My youngest is also getting in on the Switch action, and she adores the inclusion. No more is she being handed a controller that is obviously from a different console and being fooled into thinking that she is playing (a classic move that transcends generations without being explicitly explained). She gets to sit down and play the same game as sisters, or mom and dad. Usually, with us. Her willingness to receive and follow instructions(from her sisters) without complaint has gone up, and she has really enjoyed playing Skylanders, especially.

Everyone loves and appreciates handheld/tabletop modes. It's very seamless to just slide it out of the dock and keep the game going. The big girls especially like to abscond with the Switch into their bedroom while their baby sister watches her cheesy "kid" shows.

I didn't even really get an opportunity to play a good chunk of time on the console until almost a week after we got it! I was, and continue to be, completely okay with that. To watch the joy it brought my girls, was enough for me to feel justified in buying the console day one.
While we are all excited about Mario Kart coming soon, the fact is that I don't ever have to buy another game for the console, and the joy that it has brought our family has been worth it already.

I would recommend the Switch to everyone that enjoys playing video games with others. I recommend the Switch to anyone looking to play a lot of fun games on the go with ease.
I recommend the switch for everyone that enjoys gaming.
It might not be the primary console for some people, but it will make a great only console for many more.
Nintendo, in my opinion, has tapped into our childhood in a much more meaningful way than just bringing back our favorite characters and franchises(again, and again...). They brought back the sense of anticipation and unrealistic excitement of something new.