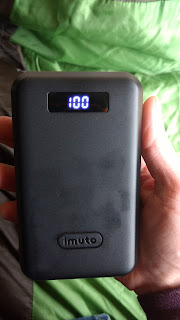 The iMuto 20000mAh Portable charger is a well-known built and quality feeling product. It is much heavier than I expected, but isn't much bigger than an iPhone 5.
It comes with a carry pouch with drawstring, micro USB charging cable, and the unit itself. There are two charge ports with an output of 1 amps and 2.1 amps, denoted on the top with one lightning bolt and 2 lightning bolts. The 1 amp port is sufficient for charging your devices while they're not in use, but it is a very slow drip and takes a while. Where it shines, however, is in the 2.1 amp port. I was able to hook it up to my switch with the pro controller's included USB-C cable, and charge the device while playing.
I started off with a 90% charged switch, and over the first thirty minutes of play, the charging bank more or less just slowed down the battery drain on the device. Afterwards, it began to charge it up beautifully.  I set my brightness to high with wifi on, and after 1.5 hours of play, my Nintendo Switch went from 77% up to 96%.
The charger lost about 34% of its life(which is slightly less than double the Switch's full battery capacity)  to do so, so it drains a lot more power than it gives back out, but I was still pleased with it's performance as a portable solution to extending the battery life of my Switch while playing.
Pictured above is the display which shows the battery life of the charging bank itself, and it is easily readable in all lighting conditions and toggled on and off by a button on the side of the unit itself.
It took a really long time to recharge the unit(I set it overnight from 50%, and it was still at 96% 7 hours later), but with such a large capacity, it isn't too surprising.
I would definitely recommend this product for your own Switch, or for any of your own charging needs on the go.