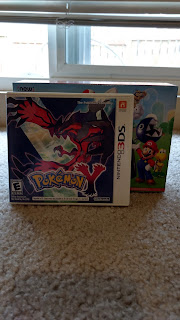 Pokemon X/Y for the Nintendo 3DS is the first fully 3D main-series Pokemon game, and it is a testament to what has made the franchise one of the most successful and enduring. It lives up to the hype, and excels in nearly every way.


Story
Right off the bat, we’re going to talk about what might be the most questionable part of the game. Your adventure begins much like every other Pokemon game- you are the new kid selected by the region’s local Pokemon professor to receive a Pokemon and go on a journey across the region to be the best trainer you can be while collecting data for further research.
This game adds an interesting twist on the standard “you get one starter, and your rival gets the starter yours is weak against” opening, as instead of being a straight-out rival, it is more like you are expected to be second best the entire time, and you are in a friendly competition with the prodigy. There are also a few other children selected in your group, and each individual child wants to do something different with their Pokemon experience. One kid wants to witness all of the moves of the Pokemon, one wants to fill up their Pokedex, and another just wants to travel with and love on their Pokemon. This group dynamic leads to some fun little interactions after progressing the game, and a few of these interactions themselves propel the game forward.


You soon run across the “evil” team, which is a vain and fashionable, and are appropriately named “Team Flare”(you can hear the cheerleaders in your mind every time they come on screen). It is revealed that they desire a world that is only suitable for a select few(the beautiful people), and many things can be inferred about them dependent upon the player. Anyways, their leader is an especially flamboyant gentleman that starts off as an interested party that wishes you luck on your journey and eventually reveals his crazy beliefs more and more as time goes on.


Some people complain about the shallow story, and how tired this particular cliche is in anime and video games, but Pokemon’s strong suit has NEVER been it’s story. It has always been about the journey, and it succeeds in providing an epic one. More on that later.


Graphics
There was once a time when a game’s transition to full three-dimensional graphics was a tricky subject that could make or break a franchise, we have been slowly inching our way towards a 3D Pokemon game since it’s inception. Every iteration of the game has provided progressively better graphics, even when released upon the same system as the previous title. Pokemon X/Y doesn’t disappoint. The 3D character models for the Pokemon are mostly exactly what you would expect, the battle animations are smooth(and hilarious at times), and the world itself if lush and gorgeous.
The 3DS’s graphical capabilities are the at their prettiest in this game, but the 3D effects are rather limited and a bit underwhelming. Pokemon is a very kid-friendly franchise, and as such, Game Freaks minimized the areas in which effects are even a possibility-almost entirely resting on battles and evolutions. However, even with the slider on full the 3D is barely visible, and adds very little to the experience of the game.
Sound
Your old Pokemon favorites have returned, and hearing the old static-screech calls of first-gen Pokemon digitized and modernized is a fun little treat for those of us that have been playing since the good ol’ days. The protagonist and NPC’s are mute, but the music, sound effects and such are generally well-composed. While they do get a little annoying when doing things such as trading, waiting for a pokemon to evolve, or healing your Pokemon at a Pokecenter, you can easily slide the volume off for those moments and not lose out anything, especially since those sounds probably play in your head when you have it muted anyways.


Gameplay
Pokemon X/Y is easily the longest Pokemon journey you partake in(around 48 hours from start to finish), and for the right people there is much to be done after you become league champion.
While the game is long, it never really drags at any point because as soon as you complete one objective, your are faced with another. There is no downtime from one town to the next-you are constantly achieving one thing or another. When you get a badge, there is usually a side-road to take before you get to the next town, and when you get to the next town, there is yet another place you need to go before you can move on to the next town.
The game is incredibly linear, but there’s nothing wrong with that at all, since you always know where you will be going. You do some backtracking here and there, and there is always the option to hang out at one location across a few different times of day to catch all the pokemon before moving on.
One of the coolest new features added to the tried and true formula is wonder trade- a process by which you take an extra Pokemon, connect to the internet, and trade it for another random Pokemon with someone else that has done the same. It’s a great way to fill your pokedex early on, and it will help you get Pokemon that otherwise might not be available to you.

Conclusion
Pokemon X/Y came through for long time fans of the series, and was even very approachable for new players. It held the new people’s hands by allowing them the widest variety of types to catch in the beginning of the game to maximize the potential of your team from early on.
It rewarded the long time fans of the game by allowing a second starter to be chosen from the original three, and had a callback to generation two by having a legendary Pokemon chase where you can catch a certain Pokemon(based upon your starter) after encountering it multiple times in the wild(an encounter you are not even allowed to act upon).
This is an amazing game for fans of the series, and allows for much to do after the main quest is done through trading, battling, breeding, and catching the remaining Pokemon.