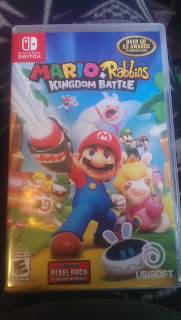 Mario + Rabbids Kingdom Battle is an interesting look into what third parties can do with Nintendo IP, and what we should be hoping for in terms of third party support for the Switch itself. It is a loving creation by a man that we all saw break down in tears at E3 when Shigeru Miyamato came out on stage to help introduce his baby to the world, officially.

We got a video showcasing gameplay and got a little bit of information from the developers about how this would be a new Mario experience, and that it would be a turn based strategy game with some light RPG elements.

It is that, and it brings a level of charm to the genre heretofore unseen. The game opens with a cute, but ridiculous story to explain the strange crossover, but boasts some of the best animation I have seen in a video game.
The rabbids, which mostly express themselves through grunts and giggles, find a kindred spirit in Mario's all too familiar yips of glee. They also find a strong leader to embark on a journey to restore order to the world. 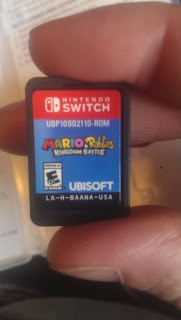 To go with the ludicrosity of the world and game itself, I noticed when inspecting the cart that the game's call letters(serial number? identifier text?), found in the black strip in white lettering below the Ubisoft logo, are very close to containing the word "banana", and I feel like this was done on purpose.

Anyways, I've briefly mentioned that the game is charming, and it is also very fun and engaging. The tutorials are kept brief (a blink and you miss it prompt to drag your movement cursor to an ally and press "A" to perform a team jump, for example), which is perfect because the game itself is very intuitive.
Your character can move around a grid within a limited range, and attack any enemies within range of where you are standing. There are extra actions that can be taken in addition to moving and attacking, which is where the skill tree comes into play.
Mario is your melee tank, Rabbid Peach is your healer, rabbid Luigi is your support, and Luigi is your long range guy. I have only played for about 2 hours so far, so I have yet to unlock the rest of the potential party members, but I am looking forward to that this weekend. Following that will be a proper review.

While the game is turn based and has some RPG elements, they are presented in an easy to digest manner, and battles don't take too terribly long. The quicker you finish them, the better your rewards will be at the end. The Pixel Pack included with new copies of the game will make your early game that much easier since the provided weapons deal almost twice the damage as your starting weapons, and they are even better than the first couple of upgrades you unlock as go.
If you make it a new battle while low on hit points or have already failed it once already, you are presented with playing the battle in easy mode with a button press at the beginning of it. You are also afforded the ability to do a mock battle before you start the battle proper if you wish to test out different strategies...which not only helps new players, but adds another level of depth for veterans of the genre and lends itself well to replays.

If you haven't gone out and bought the game, yet, do yourself a favor and pick it up. I've included some links below.