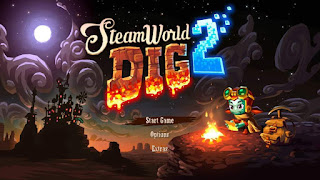 SteamWorld Dig 2 is the latest entry in indie developer Image & Form Games' Steamworld series, first starting with SteamWorld Tower Defense on the DSi(also available for 3DS as DSiWare).
An alternate future where steam powered robots rule the landscape, and human invaders attempt to steal the resources found within the robot's mines.
This was one of my most anticipated games for the Switch releasing this year, and Image & Form were gracious enough to send me a code for review.

SteamWorld Dig finds Rusty, working his way through a mine in Tumbleton deeded to him by his late uncle, Joe. After the events of the first game, Rusty goes missing, and Tumbleton resident Dorothy takes off in hot pursuit. 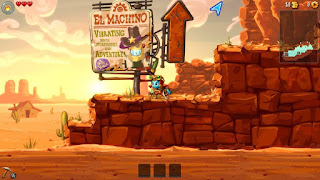 This is where our game begins, and Dorothy's initial information leads her to El Machino. Right off the bat, I need to make the observation that this game is absolutely gorgeous. Both docked and handheld, the vibrant colors and superb character design give a lot of life and charm to a world populated by sand, rocks, and dirt.

Just like the first game, Dig 2 boasts some of the tightest controls you could ask for in a platformer. The wall jumping feels much more refined, and combat seems to flow better, for some reason.
Everything felt great using both the joycon and procon, and the added HD rumble features when mining with the axe or using explosives adds some depth to the game.
HD Rumble is one of my favorite features of the Switch itself, and when developers utilize it well, as is the case here, it makes me want to purchase and play the games on the Switch for that alone. 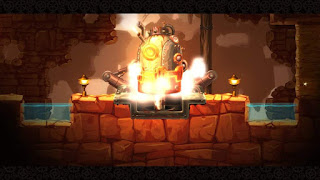 Upgrades happen in three forms- one of which is finding machines like the one pictured above. These devices function much like Chozo statues in Metroid games, except that you hop into the iron lung instead of just collecting a crystal ball.
Then, you can sell the resources that you have mined to buy upgrades for your existing equpment (these do things like improve your lantern light range, make your pick-axe stronger, and prevent your pneumatic bombs from doing damage to you).
There are also upgrade cogs, which allow for further customization and fine tuning of many of the things mentioned above.
One way of getting upgrade cogs is to collect interesting artifacts and return them to an archaeologist bot found in ton. These collectibles help lead to unlockable post-game content that can only be achieved with 100% completion.

SteamWorld Dig 2 takes the basic concept of making your way through a mine collecting resources and uncovering secrets and ramps it up with collectibles, longer platforming sections, more secret areas, and more boss battles!
When it comes to making sequels for already fine tuned and successful games, expectations are high, and Image & Form delivers on all fronts.
That being said, I can't wait to see what comes next in what is quickly becoming one of my favorite series.

More info on the game can be found below.
SteamWorld Dig 2 Info at Steam

Steamworld Dig 2 is out now for Nintendo Switch and PC, and will be available September 26 for Playstation 4 and Vita