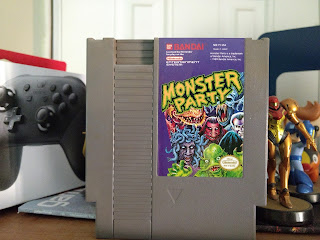 Monster Party, is a childhood favorite. It's an interesting hidden gem that is full of absurd settings, and enemies. While the Nintendo Entertainment System is infamous for outlandish enemies, settings, power-ups and logic, Monster Party may just take the cake. 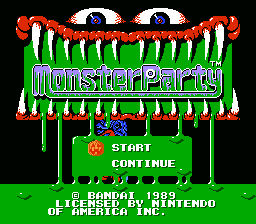 It is a horror game released in the north American market in 1989. It was never planned for a PAL release, and while a Japanese prototype has been recovered and it shows some changes(mainly to do with uncensoring certain aspects like the opening screen going from green slime to red blood), and some possible copyright infringement imagery (the first plant boss being representative of Audrey II from Little shop of horrors- pictured below), it never received an official release. 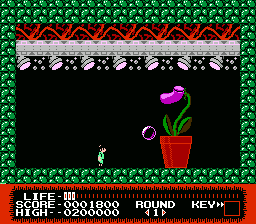 The game parodies many monsters from various forms of media, and results in some of the most absurd screenshots. I took so many during my recent play through that I had a really hard time narrowing it down to a couple for the review. I will be adding a gallery later for those that may be interested in seeing more.

Anyways, on to the game itself (they're not called ramblin' reviews for nothing).
You play as Mark, an average little boy walking home from baseball practice. You look up in the sky and see a star...only it's not a star. It's a monster, named Bert, and he press gangs you into helping him get crazy monsters under control in his world.

Mark is the default character, and can run around, jump, and hump the ground if you press and release the down button quickly enough (did I mention that I played this a lot as a kid?). Mark uses his bat to hit enemies, and while it doesn't have much range, you can also use the bat to whack projectiles back at enemies that fire them. Which is good, because it is the main form of attack in this game when you're not Bert.

Bert, on the other hand, can not only run on the ground, he can also fly by rapidly pressing the "A" button to flap his wings. He shoots lasers from his mouth when you press "B". Bert is badass, but you can only control him for a limited time, and you transform into him by either eating a pill dropped by an enemy, or randomly when collecting a "?" dropped by enemies, bosses, and sometimes injected into empty rooms. 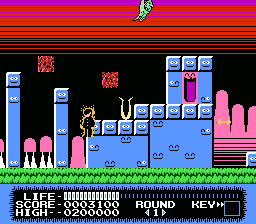 Empty rooms you say? Yes. The structure of the game is as follows- traverse a nightmare world filled with ridiculous enemies, like legs sticking up from the ground, dogs with human faces, electrified ninjas that throw lightning bolts, and giant eyeballs that run around on what must be a dozen optical nerves but resemble tentacles...and that's just enemies found in the first level. Occasionally, you will find doors in the world, and when you enter the doors, you will find a miniboss, nothing, or... 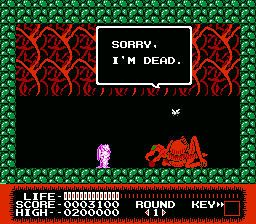 ...an already defeated miniboss that apologizes for saving you the trouble? That only happens on the first level, but it was a first for me. Anyways, the function of these minibosses is that defeating them provides a question mark. Collecting the appropriate amount of question marks gives you the key necessary to exit the level. 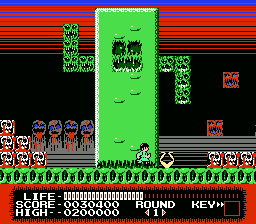 However, before I move on to the rest of the game, I have to mention what is probably the scariest part of the game- the first level, midlevel mind fuck that is the "stuff got serious" cactus, pictured above. While the game starts off with some slightly disturbing imagery (mainly the legs sticking out of the ground at this point), the music isn't all that bad and a plant that blows bubbles and a Jack O'Lantern ghost that shoots miniature pumpkins at you aren't really spooky at all,. That cactus, though? When you get into the center of the cactus, the game freezes in place, and the music statics out, while the cactus transforms into the grotesque monster seen above. The innocuous blocks you had been platforming on moments ago are now bloody skulls, and a light blue background has been transformed into a black void punctuated by the decapitated heads of children with blood pouring out of their mouths. The music becomes incredibly foreboding, and fit right in playing under an action scene from many cult horror movies of the eighties.
That moment haunted my nightmares for weeks as a kid, and I'm sure that the moment still gives people a sense of dread to this day when they first experience it.

Oddly enough, they front loaded most of the horror into that moment alone. While the rest of the game has bosses inspired by horrific monsters of the collective works of humanity, such as Medusa, the mummy, minotaur, a punk rocker (it was a different time), creature from the black lagoon (I think?), and my favorite... 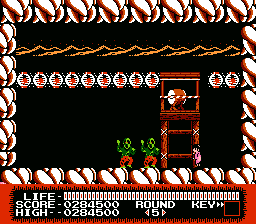 Zombies that just want to dance, it really is just standard platforming with occasional maze paths that force you to backtrack to choose the right way to go. There's even a level that requires taking the right door to advance all the way through to the (thankfully) solo boss fight to get a key. Of course, they make you take a specific route to get back to the exit. This can be a little difficult because enemies respawn when you walk far enough away from their areas (or go through a door that teleports you to another room.

Speaking of difficulty,,,the game is that. I had to use cheat codes to get through it so that I could write the review with a fresh experience in mind. Then again, NES games are infamous for their difficulty...which was programmed in often to lengthen the game's play time. The game is short- about 2 hours long, if you know what you're doing and don't die too frequently.
That being said, the game does provide quite a few opportunities to let you try to farm health or Bert pills from enemies, as becoming Bert is the preferred way to go through this game. 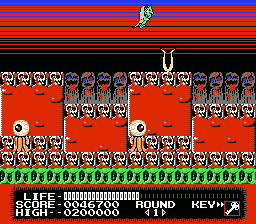 Controls are straight forward, and they are quite responsive. Not perfect, but easy to get use to. Outside of that slight bit of adaptation necessary to get better at the game, it really only has one drawback- the boss fights are repetitive. Very repetitive. They either run back and forth, shooting projectiles, or remain stationary and fire projectiles. The strategy for all of them is to basically use Mark's bat to hit the projectiles back at the boss (or fly around and shoot lasers with Bert).
Thankfully, the game distracts you from that tedium by making the bosses usually throw/shoot miniature versions of themselves... 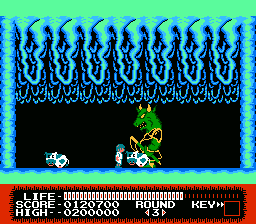 Such as the Minotaur that throws cows at you, or the Great Pumpkin that shoots little pumpkins, or the cat in a crate that throws it's kittens at you.
There is a caterpillar that rolls into a ball and rolls back and forth across the screen. When you first enter his room, he informs you that his name is Royce.

I'll let that sink in for a moment.

It's not even the bosses alone that give the game it's charm and quirkiness either. Even when you expect something to be completely normal, like finding a bat hanging from the ceiling in a cave... 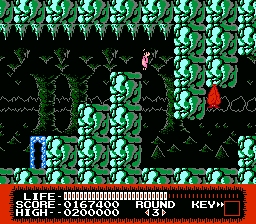 the game throws a curve ball at Mark, because it's actually a killer umbrella. 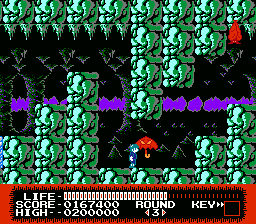 So, the game is hard, but manageable if you don't mind taking the time to learn the controls and backtrack a little bit to bring your health back up to par.
The bosses are kind of boring after you get past the third stage, but you sometimes forget that you're repeating your simple strategy because in between you're trying to figure out exactly what kind of drugs the developers were doing to create such a ridiculous game

It also has a very interesting ending. Click here if you don't mind the spoiler.

The game really is an underrated gem in the NES library. While there is a cult following out there, it really should be a lot more well known then it seems to be. Especially with that amazing box art/cart label.