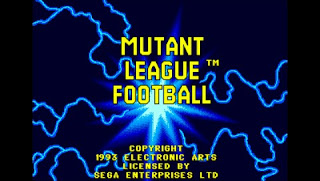 Mutant League Football is another interesting example of when Electronics Arts was still a company that excelled at innovation and quirky software releases. The developer proposed a monster themed version of Madden (using the Madden 93 engine) that allowed players to kill other players and the referee. Coaches talked smack about the opposing team and their own players. They encouraged dirty tricks, but disparaged players over getting caught.
There were landmines placed around the field, and exploding balls that could be tossed as an intentional interception that would destroy the receiving player. It was fueled by a late eighties hard rock soundtrack and illegible jibberish that was super absurd, and we loved the hell out of it. With the impending release of a modern day treatment by the original creator, Michael Mendelheim, it seemed a fitting way to conclude my "play as the monster" theme week. 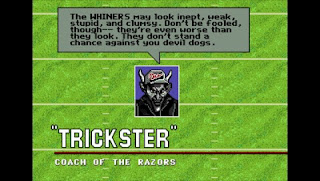 You start off the game choosing the team you wish to play as, and they have such ridiculous names as the "Sixty Whiners", "Deathskin Razors", "Killer Konvicts", and the "Slaycity Slayers".  Players have parody names like "Bones Jackson", and "Scary Ice". Your team will consist of varying amounts of trolls, skeletons, aliens, robots, and superhumans with glowing eyes.  Despite all of the silly humor and exploding players that leave blood on the field, there's actually a bit of strategy and depth to the replay itself. 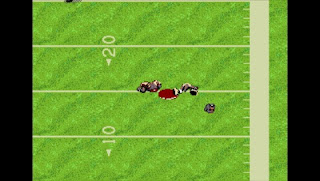 Like any other football game, you can choose plays, call audibles, and as mentioned above, pull dirty tricks such as bribing the ref (and subsequently killing the ref that has been bribed by the opposite team, which is allowed once per half). 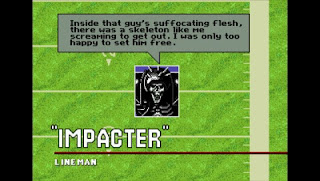 Each team has it's own power rating, and there are various modes to be played and you can set the quarter length. It's most fun as a two player game, however. 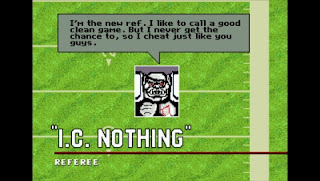 All in all, it's a solid arcade football game that stands up fairly well considering it's age and all of the advancements made in the proceeding 24 years. 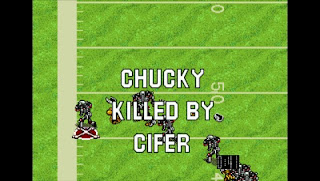 The game's unique personality and nineties attitude is a sight to behold, and if nothing else, you get some great music and silly (though sometimes grating) sound effects to carry you through.

Here's hoping the new entry lives up to it's predecessor.

Come back tomorrow for another spooky game review!