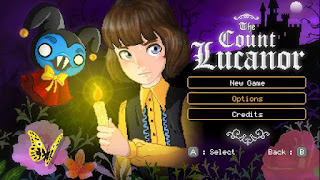 Count Lucanor is a macabre adventure game with pixelated graphics and Bach- inspired chiptune music tracks. It not only creates an amazing atmosphere, but the minimalist graphics and sparse music and sound effects create a great sense of mystery, and the details your imagination fills in are more terrifying than what often cannot be seen. 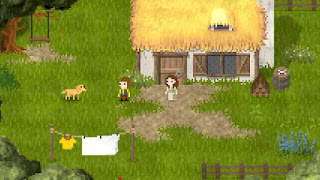 You begin your journey as Hans, whom is a poor child living in the countryside. When returning home, he asks his mother what she has bought him for his birthday, and it is revealed that they cannot afford any special treats. An ungrateful Hans replies that he is tired of being poor, and that he is going to leave like his father did(his father left for war, but never returned) to pursue his fortune.  His mom, concerned, but wanting to be supportive, gives Hans three gold coins, his grandfather's cane, and a wheel of cheese. 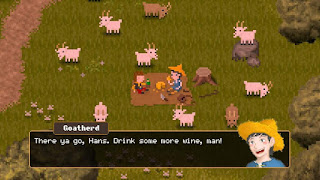 Ten year old Hans then says goodbye to his dog, and looks around his yard for the last time. He sets off into the labyrinthine woods north of his house. Along the way he encounters an old lady with a pig, and she is sitting down. She says that she is trying to take her pig to market, but she is in need of some assistance. You can give the old lady your cane, or not.
You then run across a stranded donkey that looks hungry, and a screen later you find a merchant with a wrecked wagon and a complaint about how he will have to pay his patron back for the wagon. You are given the option to give him your gold coins, or not.
After that, you run across a goatherd, pictured above. He says he is hungry, and if you offer to share your cheese with him, he will share his wine with you.
Yup, just a normal day herding goat, getting a ten year old child drunk.
You drink the wine and pass out, to which the goat herd announces that he will take you home since it's getting dark. 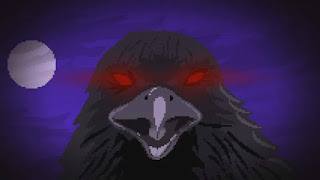 You then have a crazy nightmare, where you are pestered by the above crow, and wake up to a much more grisly scene and a darkened world illuminated only by the candle you carry with you. 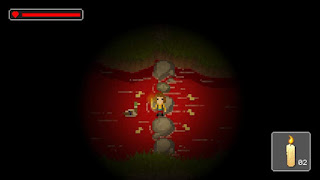 Like this river of blood with cute little duckies. After trying to make your way back home, you end up encountering a floating blue creature wearing a bell, and decide to follow him into the castle. Upon arriving in the castle, he explains that he is the aide to the Count Lucanor, and that Lucanor is looking for an heir to his vast fortune, you must only guess the blue creature's name. 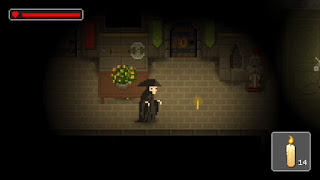 It is revealed that you will need to explore the castle to figure out the answer to the creature's (a kobold) riddle. In the courtyard you will encounter the three travelers you came across earlier, hopefully that you chose to help.
They will give you valuable Intel about the castle and kobold, and the merchant even has some goods for you to purchase.
After the first little bit of exploration, the clock sounds and you are told that the castle's servants are now out, and you are to avoid them if you can.
This brings about the stealth elements of the game, as there is no direct combat. You must hide from the servants, lest they harm or kill you.

The game has some environmental puzzles to overcome, and locked doors that require the appropriate color key to open. Behind each door can be a treasure, a small room, or a labyrinth of fire panels and spikes.
As you progress, you piece together more clues and story, and discover more about the other characters.

The game offers some meaningful choices and multiple endings, which adds to the replay value of this already fun game.

It might be one of my new favorites on the system.
Check it out when you can. It's available on PC and Switch now, with PS4, PS Vita, and Xbone versions coming soon.

The Count Lucanor at Nintendo eShop