I'm going to be honest. I obviously had not planned on reviewing this game today, since it's release was a complete surprise for seemingly everybody. So, I am striking while the iron is hot, and pushing my planned review back to tomorrow.

I, like many others, loved the first season of Stranger Things, and I have been very excited about the upcoming release of season 2.  Netflix, in a genius marketing move to capitalize on the series' eighties setting and nostalgia vibe, has released a (free!!!) pixel art game on both Android and iOS formats. Other than the super conspicuous "Watch on Netflix" sticker plastered on the title screen, there are no other ads to be found, so you never get pulled away from the game experience.
You're also greeted with a chip-tuned version of the Stranger Things theme music, which adds a great bit of atmosphere to the retro-inspired game. 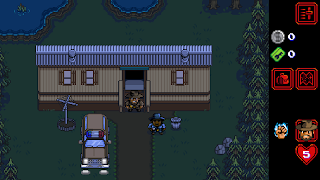 Upon starting out, you are presented with two options- Normal Mode, and Classic Mode (more difficult for those born up until 1984). It says that the easier option makes it less harmful to die, but i have played both and it seems the only difference is that the harder mode sends you a little further back in the dungeon, but it hasn't reset any progress.
You begin playing as Hopper, when you are awoken in the middle of the night with a phone call that the Byers boy has gone missing, and that a child has been spotted at the research facility. 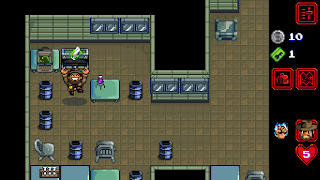 The game plays a lot like an old school, top-down Zelda game. The research facility is your first dungeon. You have hearts for health, you collect key(cards) to unlock doors, you can collect heart containers to get more hearts, you have a melee attack(Hopper), you have to find party members in place of items to complete your dungeons and solve your puzzles, and there is a boss fight at the end of the dungeon. 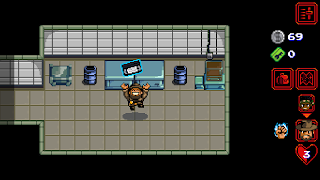 The game adds a few different kinds of collectibles to be found- most notably the VHS tapes that will unlock a special trailer once you collect all of them. 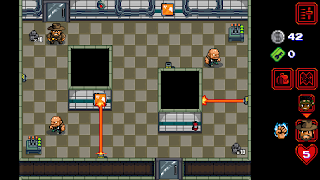 Each character brings something new or interesting to the game itself, and different characters from the show will give you side quests to enhance your experience. The game controls well, and presents a fair amount of difficulty.

You control your character by tapping where you want them to go, or the enemy/object that you want to interact with. It works out well, and I never felt like the touch screen controls hindered me unless I didn't properly plan out my route first. If you need to reach something across the screen, for example, it is best to navigate the path you want to avoid enemies or obstacles, rather than trying to let the game decide for you. 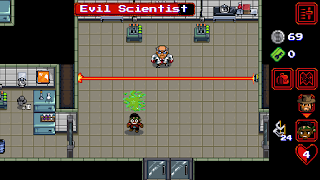 I'm still working my way through the game - it's frustrating and satisfying puzzles, and it's fun boss battles. However, I'd definitely recommend it as a fun mobile game to blast away on for a few minutes whenever you get the chance.

Remember to check back in tomorrow for day 5 in my 31 day celebration of Halloween!
Links below to the previous day's review and home page for the celebration.