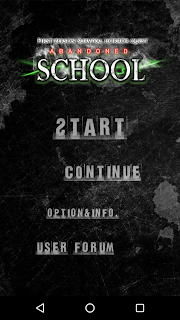 I wanted to explore more horror games on the horror front, and I ran across many lists that included "The Abandoned School". After playing it, I understand why.

It's a very atmospheric room escape game. You look around at your surroundings, and need to figure out what is out of place, and what you need to do to move on to the next room. Many of the puzzles just require that you click an object multiple times to move it, break it, look at it, etc. 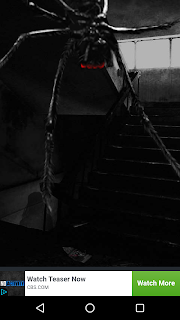 The second room (stairway) in the game seems to give trouble to the most people, and it did me, too. Not because it is a difficult puzzle, but because if you look above, you see a large spider in your field of vision. To get rid of this spider, you shake your phone to make it drop. So, what is the problem? Many people seem to not be able to get the app to recognize that they're phone is being shaken, and they get stuck here. My problem was that I tried this level at least half a dozen times before I even had the spider show up, and that was only after doing everything else in the room (some of them multiple times) and waiting for what seemed like ever. It actually was probably only 5 minutes, but that is an excessive amount of time. I even looked up youtube videos of people playing and two different people had to wait about 2.5-3 minutes for the spider to drop down.

Room three, the Hallway, is also a hurry up and wait affair. However, this room actually helped provide some of the best feeling of unease in the game, yet. While the music and sound effects are sufficiently creepy on their own, and the black and white (occasional red blood splatters) visuals help set the mood, nothing beats a long hallway lost mostly to darkness. If you peer towards the end, there's just enough light in the background for you to make out the shape of the hall, but not enough that your eyes don't start filling in the empty space with things that might be there.

It's free on the android and iOS app stores, supported by ads. I do, however, wish that there were an option to pay a small fee and remove the ads so that I could not be distracted from the creepy world I am trying to be immersed in.

It's a short game to play through, and there isn't much reason to keep playing after the first time. As such, I'd say that it is worth checking out, but recommended to do so in the dark. That way you can feel a bit of unease, maybe get some small jump scares, and try not to get too bothered by the trailers for bright and cheerful apps.

Check back in tomorrow for another spooky game review.