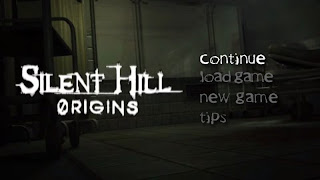 Be Travis Grady, trucker. Be tired, driving at night through the rain. Decide to take shortcut by Silent Hill to get to destination quicker. Weirdo in a cloak comes dashing out of the woods into the road. Slam on your breaks. Get out to check on weirdo, isn't there anymore. Look at sideview mirror, see ghostly girl in mist approaching from behind. Turn around. Nothing there. Look in mirror, girl closer. Turn back to look, still nothing there.
Then, a little girl appears. Try to get girl's attention to talk to her, she runs off, disappearing into the fog. Start walking into the girl's general direction through the fog, end up in Silent Hill. See house on fire, run over there to see if anyone is in there. Walk through burning building, save on fire little girl. Pass out.

So begins the portable entry (later ported to PS2) of Silent Hill, which is a prequel to explain the events leading up to the first game. It starts off creepy, as it should, and feels very familiar. Issues with a car while driving, foggy night, a grown man trying to find a young girl. You know the drill.

When Travis comes to, he decides that he needs to go to the hospital to check up on the little girl. On the way to the hospital, the town is noticeably....empty. Seems weird, but Travis doesn't really notice. Then, he gets into Alchemilla Hospital, only to find nobody inside. So, he starts checking doors. He gets into a room with a two-way observation window, and sees the little girl on the other side, in a bloody room. She puts her hand to the glass, and you do the same. The moment your hand touches the glass, you are transported to the other world that is all too familiar for us veterans of the series.

This is where we lead into the game, proper, and this is also where I will cut off the spoilers.
You wander around the hospital looking for keys and clues, and often have to switch between the two worlds to accomplish your goals for the first little while (find a key in the other world, switch back to the "real" world to unlock the door), and as usual, combat is best avoided.
There are a number of one-use melee weapons, which add a little bit of a lighter tone to the game. Whacking a nurse with a small portable TV that immediately breaks is pretty hilarious.

There are knives and guns to be found, as well as ammo, but they are sparse, as is to be expected, and you can often run away from most enemies without needing to engage.
The camera isn't too bad considering the lack of a second stick, but it can be a little jarring at times to touch your L button to bring back to Travis' back. Controls are precise, and everything feels more precise than the first game in the series, at the very least.

The game capitalizes well on it's atmosphere, imagery and tension more than jump scares to create a real sense of fear. In my opinion, one of the best ways of evoking that mechanic in this game early on was the travel between both worlds. I often found myself milling around the hospital in the "real" world looking for more clues or items, or just taking breaks from playing the game altogether. This way, I could prepare myself for going back to the dangerous side of things. Kind of reminded me of talking to NPCs that only repeat themselves in RPG villages because you don't feel like starting another random encounter again.

The game does a great job of crafting a story, and making Silent Hill into a mostly breathing town with a horrifying history and the beginning of the cult. You also learn a bit about the protagonist along the way, as per usual. The game provides three separate endings depending on your actions. The best ending leads into the events of the first game in a satisfying matter...while the others make you wish you had done things differently this time. At least in this world, we get to try again.

Check this out if you can. while I recommend getting it on the PSP for the more intimate experience that goes with playing on a handheld (especially in the dark), the game received a very serviceable port on the PS2, and can also be purchased on PSN for the PS Vita.

I hope you enjoyed my Halloween series this month, and my "Trick and Treat" reviews today.
Come back in November for the start of my two- month series on the "Switch Holiday Buyer's Guide".