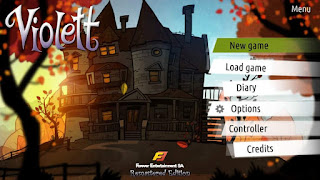 Earlier this month when I began doing reviews, I noticed that the different point and click adventure games that I was playing would work so well on modern devices with their touchscreen interfaces, and was kind of confused as to why we really weren't getting more games or remakes in the genre. Enter Violett, a modern take on the classic point and click games of yore, with a whimsical art style that feels equal parts Coraline and Calvin and Hobbes. 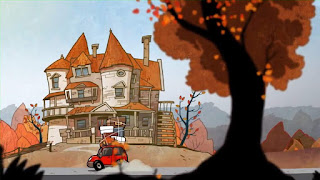 Exposition in the game itself is very light, and introduces the premise through an animated cutscenes that opens the game. A little girl is moving to the countryside with her parents, and doesn't seem too happy about the remote location, despite the house itself being a gorgeous piece of architecture. We get inside the house, and Violett's parents are having an argument. Violett escapes to her room, and she discovers a mouse hole in the wall. She reaches in to investigate, and pulls out an old necklace charm or brooch that begins to glow, and sucks her into a portal? It's not really clear if she is in an alternate dimension, or merely shrunken down and exploring the house itself as a miniaturized version of herself.
This isn't the only nod to "Alice in Wonderland", but it also had nods to both "Coraline" and "James and the Giant Peach", as well. 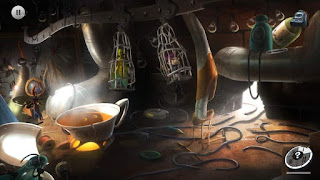 After the introductory cutscenes is over, we're transported from a comic strip panel world to a disturbingly stylized CG world reminiscent of the cinematic versions of the aforementioned inspiration points.
It is decidedly gorgeous, and creates a great balance of bright, fun environments and disturbing depictions of tea kettles and insects.
We start off in a room where we must escape from a cage, and avoid the detection of an insect preparing dinner. 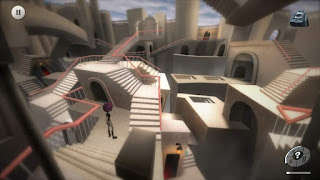 Fortunately, this adventure also draws inspiration from the "room escape" games where everything that you need to solve a room's puzzle is contained within the room itself. As such, the puzzles are satisfying, and much less frustrating and obtuse than those found in older style point and click adventure games where you had to constantly backtrack and collect items that were easily overlooked before. These items often had to be used in conjunction with other items or object in a very arbitrary manner that was hard to discern without extensive trial and error.

While you will spend some time exploring the items in the room and figuring out how to make it work, they usually are pretty intuitive. If you are having trouble, however, you are treated to a very pleasant soundtrack, and stunning visuals in the aforementioned art styles. Sometimes, you may even find yourself just standing there to enjoy the ambiance.  There is also the option of obtaining hints in the form of what look like hand-sketched notes with simple animations.
I definitely recommend playing this handheld, but there are non touch controls that can be utilized while docked. These are okay, but I prefer using the touchscreen.

The game is a joy to play, and I recommend it for everyone to try out. It has some creepy moments, but nothing that would make it too scary for children, whom might enjoy the laid back puzzle solving and the art style.

The game is also available on iOS, Android, and steam