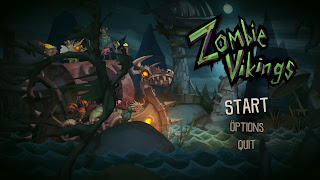 Zombie Vikings is another great example of games as art. The grotesque and absurd design of the world calls to mind classic games such as Earthworm Jim, Wild 9, and cartoons such as Ren & Stimpy, Ahh! Real Monsters, and the animated Beetlejuice. Beyond the design, though, the world itself look like a hand painted (scary) children's book has come to life.  The animations are smooth as butter, and everything in the world is worth a closer look. I often find myself stopping after eliminating the most recent horde of enemies to really take in everything that I was looking at. It was the first time I did this that I really notice that to go along with the storybook aesthetic, the characters flip around as if they were 2D cutouts. Just a beautiful game, and thankfully that's not all this is. 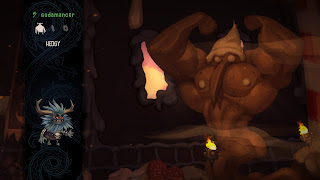 The music, is also great. At first it is very jarring to hear jaunty horns and dancy jazz drums to go along with a gritty, dark fantasy world full of  zombified viking/animal hybrids and anthropomorphic worms and cats, but the absurd setting and presentation make it start to all mesh together. In addition to that, the music gets you hyped for high- adrenaline beat 'em up action, and it works so well. 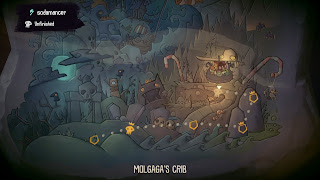 While I know that I usually start off most of my reviews giving a general setup to story, I couldn't help but rave about the art style, animations, and music first. They're just so infectious, and one of the things that set this game apart from so many others. However, the story is pretty entertaining, as well. Odin's eye has been stolen by Loki, and he tasks the team of Zombie Vikings with recovering it. When asked if the world will end if they don't get the eye back, Odin dismissively tells them "no, I just like seeing".  Comedy.
The game is full of such humor, and the story is pretty heavy for a beat 'em up game. There are fully voiced cutscenes throughout the game, but they never feel too intrusive because they are so well executed. You encounter enemies and NPCs alike that are also voiced, and each of them have some weird quirk or charm to them. 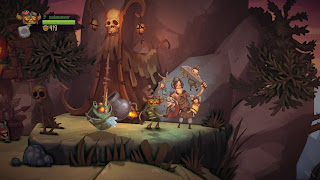 NPCs also provide side quests to undertake while you're traversing the levels left to right, and these quests often unlock cool new swords or provide some extra story beats. Pictured above is one of my favorite unlocks- a cat tied to a stick that scratches your enemies.

After all the ranting and raving about everything else, we come to the game itself.
It's a beat 'em up. You move through the level, left to right, and mash your attack button to destroy your enemy. There is blocking, rolling, and each character has their own special move to strategize with and prevent the combat from becoming stale. The hit detection is amazing, and the action is frantic.

Which leads to one of my only two, very minor gripes with the game- it might move TOO fast. This is just a personal quirk, but I sometimes found my character moving so quickly through the mass of enemies that I lost track of where they even were on screen. Ironically, my favorite character in the game, Hedgy, also happens to be the fastest. I love his speed, and I love his special move that involves throwing up fully formed skeletons that explode or can be used as projectiles against your enemies.

My other minor quip is that the game begins with a very long loading time. There aren't many load times after that, but I did notice a few slowdowns here and there during levels when a huge wave of enemies came in, but it was infrequent and never really did much other than momentarily distract me from drinking in the scenery.
Everything else about this game is fine-tuned to it's own ridiculous world, and I couldn't love it any more. It feels like a labor of love. I just need to get some buddies over to enjoy some old fashioned couch co-op fun.

Make sure to return tomorrow for another review in my 31 Days of Halloween. If this is your first review in the series, make sure to click the below links to catch up.