A great horror themed game that should have been included on the SNES Classic. I'm sure there were licensing issues with LucasArts, or Nintendo didn't want to deal with them...but it would have made an excellent addition to a console with two included controllers.
The game holds some of my favorite childhood memories playing with my friends instead of against them in games like Mortal Kombat and Super Mario Kart. The large number of stages, the campy, B- rate horror movie tropes, and the radical protagonist wearing paper 3D glasses with a tall flat- top.
Does it stand up to the test of time, or is it a case of rose and azure colored glasses distorting the reality? 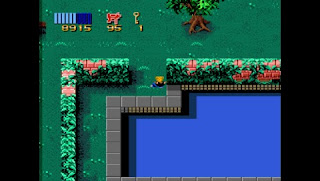 The game gives you two options for your player(s) - Zeke and Julie. They play identically, so who you choose to play as isn't significant. You are given a varied arsenal in which to use to defeat the titular zombies on your quest to save your aforementioned neighbors.
An uzi, exploding soda cans, bazooka, and tomatoes (among others I'll let you find) all provide a little bit of variety over "point and spray" gunning.

You navigate labyrinthine suburban neighborhoods that include pools, impassable hedges, fences, homes, and gardens with fencing over top. You can jump into bodies of water to rescue your neighbors floating on innertubes, but you have a bubble meter that gives you a limited time to complete your task. Around each level you will find scattered items that can restore your health, or keys to unlock doors. 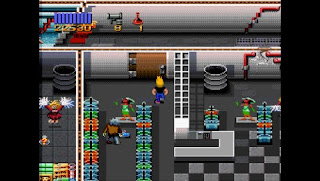 The second level, seen here, is one of my favorite types in the game. It depicts a shopping mall, and one of the enemies introduced in the level is an autonomous doll that chases you with a knife- albeit a more dapper version of the infamous Chucky doll from the Child's Play series.

Controls are tight and responsive, and the game is just as fun now solo as it was as a child with friends.

There is no dedicated jump button, but if you get next to a body of water or a trampoline, the character will automatically jump into/out of when you push towards it on your dpad. 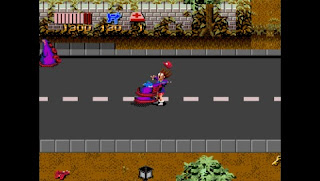 Since the game is made by LucasArts, they included a shout-out to the Maniac Mansion series (which had just received a  recent toi then sequel entitled "The Day of the Tentacle"), by including a Bonus Level. You can unlock the level using the password "BCDF", which are the first four letters available on the password screen after the numbers.
.
It's just as good as you remember, possibly better, somehow.

Remember to come back tomorrow for another review for the 31 days of Halloween!!