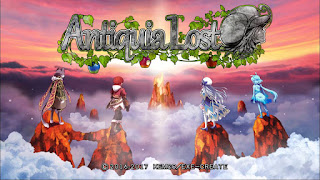 Antiquia Lost for Nintendo Switch is another solid entry in KEMCO's long string of turn based RPGs. For anyone in love with the 16 bit era of story-based RPGs that tell epic tales, this will be sure to please. It looks and feels much like the classic RPGs of yesterday, while adding in some cool new features to bring it into the modern gaming world. More on that as we go. First, we will jump into a brief story introduction. 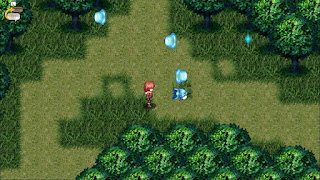 Antiquia Lost takes place in a world that is home to three tribes- the Fai, the Ruta, and the Eeth.
These three tribes were at war long ago, but settled their disputes and learned to coexist peacefully. Each tribe has their own strengths and weaknesses, and they each bring a unique skill to the game itself, particularly useful outside of combat. Antiquia Lost starts us off with an introduction to two of our main characters- Bine, the Fai tribesman who protects his hometown from demons, and Lunaria, a half-Fai, half- Ruta girl that is the daughter to Serafina, a rumored witch in the woods outside of town. Lunaria is unique because it is difficult, we are told, for the Ruta to breed with other tribes...because they are a race of slime people. Lunaria kind of switches back and forth between a human appearance, a slime form, and a hybrid, as seen in the picture above. When we first meet her, Bine runs into her, and sends the different parts of her slime body flying. This is a good introduction to the strange humor that we will see in this game that gives it some personality, and a cute twist on the "boy helps girl pick books off of ground" trope.
We also learn that Lunaria doesn't gain experience, but powers herself up by consuming rocks that boost her attribute points. In my game, I fed her almost all of the gems I acquired as soon as I got them, and she was super powerful very quickly as a result. The gems can also be equipped to a party member in combinations of three, and act as accessories do in most other games.
Soon after this encounter, we make our way back to town and learn that there have been a rash of disappearances involving royal family members from each of the tribes. The mayor of your hometown asks you to investigate, and sends you to the Eeth emissary, Jade, currently staying in your town to ask him to escort you. Here, we learn that the Eeth are cat people, and a little bit about their special abilities- namely, that when you're in the overhead world, the Eeth can smash rocks that block your path. Along the way, you encounter a Ruta tribesmen, Safira, who is trying to find her way out of the cave you find her in. You learn that Ruta, being slime people, can squeeze into narrow spaces. She joins your party, and this is where your adventure truly begins. 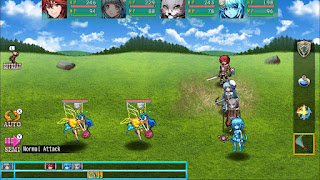 The game has turn based combat, as I mentioned above. You have the option to attack, use magic or a skill, item, or run. Standard stuff. You can also press the "X" button to auto-battle, and this handy feature makes random encounters of weaker enemies a breeze to fly through. Boss battles still require attention to detail, however, and it is advised that you don't use the auto-battle feature against them.
Whenever you're out of combat, you'll be able to utilize the different' party member's unique abilities by shuffling them to the front of the party using the L button and investigating the appropriate location. You can heal your party members on the overworld by pressing the R button. This will consume one party member's MP, but it is a quick way of healing without needing to go through the various menus.
There is also a crafting system that allows you to combine like weapons together to make one stronger weapon, and this is a lot more in-depth than that, but I'll leave it to the game to explain these finer points. You can also plant seeds in pots, similar to the Berry planting mechanic found in Pokemon. These seeds mature in 10 minutes, and can be harvested at that point. This is all done in menu, so you don't have to go back and forth from your current area of progress back to a static location. It's a nifty way of acquiring items without using money or needing to find a shop in a town.

Antiquia Lost also has a small gambling system where you redeem Pandora tickets and money in exchange for rare items. This is also the basis for microtransactions in the game, as it was originally made for mobile, and you can still spend real money on these microtransactions on your Switch, so parents be warned.

The game has charming characters, and interesting story, and a deep level of customization to be done with your characters and their weapons/armor. The little features like a readable conversation log, switching between characters on the overworld, auto battle, and healing with a button press are nice ways of streamlining a genre in which certain parts of the game can feel like a chore.

The game is worth checking out for fans of the genre, and offers enough ways of streamlining the turn based combat and cumbersome menu navigation that turns newcomers off that it might even have some appeal for novices.