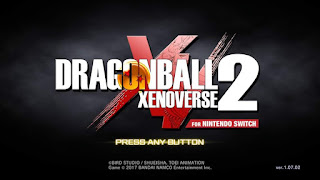 Yet another opportunity for me to explore a world I would otherwise not have. In short, I don't care for the Dragonball series. In part, or in whole. I always found it to be a primary example of boring anime. I remember most episodes seem to have started off with one to two minutes of fighting, eighteen minutes of walking and talking about nothing interesting, and then they would encounter someone, and scream at each other for half of a minute before the credits would roll. At which point, you would have to tune in for the next episode to see the actual fight you had been waiting this entire episode for, only to have that fight be front loaded on to the next episode before more talking. 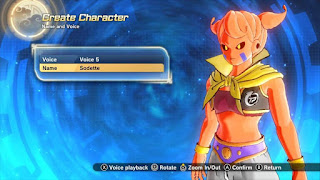 Anyways, Dragonball Xenoverse 2 manages to be fairly close to that experience. It's a fighting game hidden within an MMORPG structure that most of us are familiar with, at this point. If not, it is essentially a story driven experience where the specific details that follow the introduction are purely incidental, and don't really have a far reaching impact beyond completion of whatever mission you've just successfully navigated. Along the way, you can interact with other players, computerized and real, craft different materials, and customize your characters stats and move sets. Above is my female Majin character. I don't remember why I chose that race over the others, but she looks pretty badass,

The basic premise here is that people and aliens are showing up at various points in history when they're not supposed to be there, and altering the course of history in one way or another. You, and everyone else playing, are an agent recruited to stop these evil doers from screwing the pooch. It's interesting, and gives a great excuse to visit and invent many possible combinations of character interactions at various points across the series' history.

Being able to customize your own character is a great bonus, as it helps immerse you into the Dragonball world without forcing you into being a well known and beloved character. That being said, you can take on missions where you DO get to choose to be characters from the show, and this helps earn you experience and hone your skills. 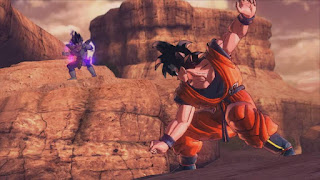 The core game itself is fine. Navigating the hub city and talking to everyone is pleasant, and there are many opportunities to buy things, craft, or train with specific characters from the universe to become better. You can choose to go through the city on a vehicle to get around more quickly, but I would have preferred the ability to just warp to any previously visited area.

When you take on a mission, you take on a fight, or a series of fights that play out like a lengthened round of a 3D fighting game in which you can move in all directions - including flight and underwater. It's very satisfying to wail on a character as they fly up, down, and around. All the while, you are building up a skill gauge that enables you to use special moves to up your damage and send your combo number count into the dozens. When facing weaker enemies, it is very easy to mow them down using just basic attacks and the occasional ki strike, unleashing your special move for a stylish finish. It balances out this ease of defeating henchmen by forcing you into actually utilizing your combos and special moves multiple times against bosses and more powerful characters.

Where the game falters, at least for me, was that I felt like the game designers thought that we were all idiots. The game feels like a constant barrage of immersion breaking tutorial windows that are honestly completely unnecessary, considering the fact that you can pause the game and bring up a list of combos and controls
Even when the tutorial boxes pop up mid fight in the center of the screen to give information about specific context related controls, it is sometimes so difficult to pull off the suggested move that it's better to have never known that the move existed to begin with.

So, if you can get past all of the bloody tutorials that never seem to end (I have played for 5-6 hours and still seem to get them almost every third NPC/mission). The game is a lot of fun, even if you aren't a fan of the Dragonball series. I suspect that being a fan of the series makes it a lot better for you, though.

Heads up - During combat, the game runs flawlessly both docked and undocked. When you're navigating the hub city, on the other hand, you will get massive frame drops while in handheld mode. Thankfully it is consistent when it matters, but if frame drops bug you a lot, you're going to want to be playing docked as much as possible when you have to be in the hub world.