Ebony Spire: Heresy is an homage to early CRPG Dungeon crawlers. It's main gimmick relies upon it's inventory system, and the ability for you and every enemy in the game to utilize any given item that is available. Sometimes an enemy throws a powerful weapon at you, but they miss. Sometimes they throw a fire bomb and do lots of damage. Other times, you'll throw an item at an enemy, and if you don't kill them, they can pick it back up and throw it at you.

The game is all about exploring the dungeon, collecting items and figuring out how best to use them. I kept stockpiling keys so as not to be hindered by too many locked doors, but often didn't find enough locked doors to justify filling up 1/3rd of my precious inventory when I could have been carrying around more weapons to throw.
So, exploration and inventory become the most important aspects of the game, and they are very well executed. Exploring is fun, and the controls begin to feel very intuitive after not very long.

The game's log is a helpful tool, as it lets you know which monsters are around you, and what they're doing. 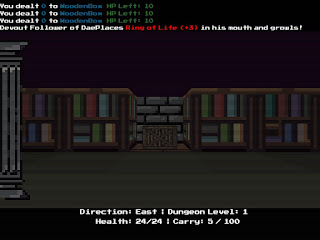 Strangely enough, they sometimes put things in their mouth. I'm not sure why, but it was definitely a quirky little bit of NPC action to catch. Adds more personality to this already charming game.
The game has 8 bit graphics to enhance the old school feel, and it's sound effects have crept straight out of the past. The lack of music during castle exploration is actually nice since it lets the sound effects shine, but there is very pleasant medieval court music on the start screen.

You don't gain experience or level up in the game, rather you find progressively better weapons, armor, and accessories as you advance through the game. You can equip one set of armor, one weapon, and two accessories at any given moment.

One of the coolest things for certain people? The game is open source, so you can add your own levels, enemies, and items to the game. So, while this game is designed with short play sessions in mind, I found it hard to pull myself away once I got started, and could easily see spending entire weekends wandering the halls, particularly once the community starts sharing their own creations.

Ebony Spire is available on Steam today, and has even launched with a discount!