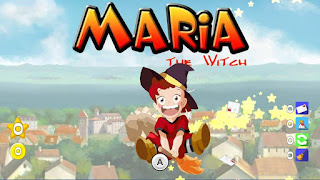 Maria the Witch immediately calls to mind Kiki's delivery service. The art style is cutesy, you have a little girl on a broom delivering things (mail, in this game), and a whimsical soundtrack. However, the cute art style, and magical music are where the whimsy ends. 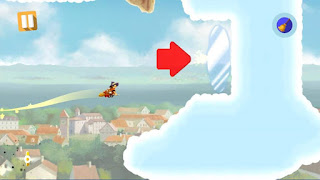 I was cautioned that the game was deceptively difficult, and they were not even exaggerating in the slightest. This game is brutal. Like Ninja Gaiden on a broomstick brutal.
It sometimes feels a little cheap and frustrating, but it is all very satisfying once you realize that it does rely on precise controls and pixel perfect timing. If you fail, it's usually your fault, and you almost always immediately recognize why. 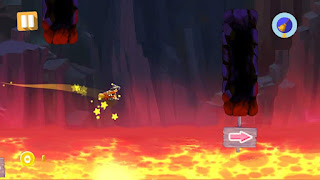 Let's start at the beginning. You are Maria, the titular witch, who is tasked with delivering the post via broomstick around the city. The bad guys abscond with your mail, and you must give chase to find them. Along the way, you will recover letters and deliver them to their proper destination.
You will be given the opportunity to collect coins, which can be used to buy checkpoints. These checkpoints are vital, because as I said before, the game is difficult. Everything that you touch can kill you. There are designated safe spots on the ground where you can land, but if you're not level, you will crash, and must start over.
As you progress through the game, you will be given the option to choose a power-up/condition to aid you on your next level. For a few examples, you can choose an hourglass that allows you to remind time after a crash to avoid that crash, you can have all enemies cleared off the level, or you can get a treasure chest that keeps coins and keys for you that you normally lose upon a crash.
The crashes have wonderful animations, but you'll get tired of hearing Maria cry out in pain every time you do. So far, I've been burned by jets of steam, zapped by clouds, crashed into rocks, and turned into smoke by weird cat-like ghost things.
The game has one handed controls- you tap Y or A to move Maria to the left/right, R button to try over after a crash, press + to pause, and use the left stick to drag the cursor around(and B button to choose your option with the cursor), and use X to spend your coin at a checkpoint.
My daughter played quite a bit of this game on my suggestion. I watched her as she intently focused on trying to figure out the controls of the game, and Then watched her face go through the cycle of concern, glee, humor, and eventually frustration. Over and over.  She would get very tired of crashing after a while and go back to Super Mario Odyssey, but i noticed that every ten minutes or so she would end up back on Maria the Witch, trying to get just a little further. When I finally asked her what she thought, she told me "it's a stupid game. I just want to get farther...but I keep crashing. I need to keep trying"
Sounds like me at her age. You get so mad at the game because it's difficult, that you insult it, because it's much easier than just admitting that you made a mistake and need to learn how to get better.

That's really what this game is about. Reminding you of those times when games were challenging, and the only way to get better was to practice. Learn the course, time all of your button presses just right, and then go back to explore the alternate routes.
The alternate routes, btw, are usually worth navigating just for the coin they usually offer alone. I mentioned earlier that you needed to use a coin to activate a checkpoint? Well, as far as I can tell, there is only one coin in between any given checkpoint and the next, and it's usually not in an obvious spot. So, you'll find yourself wandering around the safer areas of the level looking for hidden tunnels (which are usually behind a mirror portal) that might contain a coin to use on a checkpoint. There are infinite tries, I think, so you can just go silly bouncing around and trying to take all possible routes.
Get a lot of practice. You will need it.
For a budget title, it offers a lot of play value, as long as you can tolerate it.