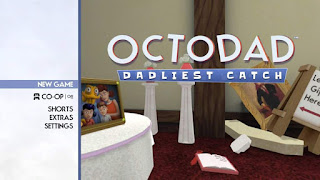 Octodad Dadliest Catch is a great physics puzzler that takes on the absurd premise that you're an octopus trying to pass yourself off as human.  You control a couple of the tentacles using the triggers and analog sticks, and manipulate highlighted objects with the A button. 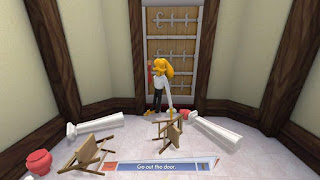 In addition to objects that can be picked up, nearly everything else in the environment can be interacted with. Running into things will knock them over, and everything has it's own physics based on it's size and which direction you hit it from. There really aren't too many penalties for just flailing wildly around and knocking anything and everything over, other than that those objects will now be in your way, making it more difficult to navigate from your current objective to the next. You can pause your game to bring up a list of objectives, which may help you better plot your course.
You will be performing mundane tasks such as getting dressed for your wedding by manipulating doors and navigating hallways. You'll then have to find your ring in a chest full of junk, then place the ring upon your wife's finger.
Fast forward a few years and you'll be making yourself coffee, bringing milk to your daughter (who is all human, for some reason?), and then pouring it into her glass for her. 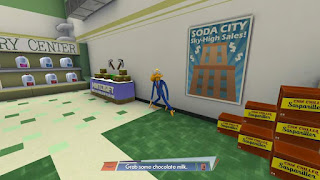 While the idea of performing what amount to daily chores sounds very boring, the execution of trying to achieve these things with flailing tentacles is such an interesting and weird way to manipulate the world, that it becomes both riotously hilarious and nerve-wrackingly  frustrating when you fail.

This game has also been released on every current platform leading up to this, and my first experience with it was on the Vita at a local Gamestop's demo kiosk. Most notably, my youngest daughter loved to play this game. Using the sticks to flail around and wreak destruction brought her more joy than any other video game up to that point had that didn't involve petting a puppy with a stylus. She wasn't remotely interested in figuring out the rest of the game, she just wanted to watch the octopus in human clothes knocking things over. I was the one that had to figure out how to move his "legs" to get away from the opening screen so that she could continue to knock things over with her flailing arm.

The game is a lot of fun, and learning how to manipulate the tentacles in a precise way is a very rewarding experience. While it wasn't in my youngest spawn's level of patience to learn how to properly squeeze between two shelves in a grocery store freezer section, she still had plenty of fun knocking cushions off of a bench and throwing them around.
The game has a wonderful art style, and very pleasant soundtrack, especially the opening theme song, Octodad (Nobody Suspects a Thing), by Ian McKinney.
Committing yourself to the game isn't going to be everyone's cup of tea, but you owe it to yourself to at least try it once, if just to understand what all the fuss is about.

Octodad Dadliest Catch on Nintendo eShop
Find out more about the developer here.