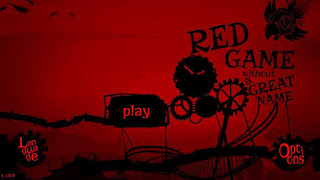 Red Game Without a Great Name might have an interesting title, but it definitely stands out, and the charm fits this touch based puzzler that takes place in a steampunk inspired world that boasts a bright scarlet hue.

Red Game Without a Great Name is actually the original game in a series that also includes Green Game: Timeswapper. However, the publisher, iFun4all, got approval for Green Game first. In fact, those game released today on the EU eShop, but won't be coming to the North American region until December 7th. 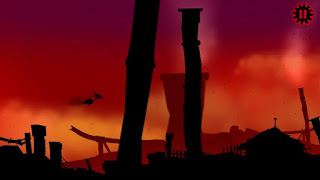 The game has very simple controls, much like it's already released sequel. Instead of being able to control jets of air to guide your unwitting bird through the level, you now teleport your bird with a swipe. To do this, you press on the bird itself, and wherever you drag your finger to will be the point to which your bird will appear.

Complicating things are the sharp objects and barb wire obstacles that need to be avoided. There are optional collectibles in each stage that are usually placed cleverly next to the barb wire objects to test your ability to teleport your bird in and out of tight situations. 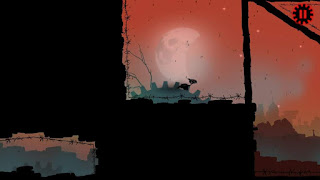 Red Game Without a Great Name has a charming art style, catchy music, and addictive game play.  The swipe controls are perfect, and the game's difficulty steps up at a satisfying pace. It might be a little on the easy side at first, but the pleasant thing is that even the more difficult parts early on (collecting gears) can be skipped early on and replayed once you've built up your timing skills.

ifun4all has provided Nintendo Switch owners with yet another fun budget title. If you're in need of a fun puzzle game on the cheap, this is an easy purchase. Be warned though, there is no support for docked mode.