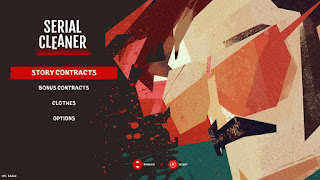 Serial Cleaner is a game that I previously covered for it's PC version as part of my 31 Days of Halloween series from October. I went in to quite a bit of detail there, but I'll refresh everyone on much of the details, and then discuss how the game translated over to the Nintendo Switch.

Serial Cleaner starts off with a very stylistic, and cinematic cut scene reminiscent of the great seventies cops and robbers action movies. The cheesy, but pulse pounding movie score sets the mood perfectly, and the hand-drawn paper craft like graphics make the game less grotesque than it ought to be, and add a lot of charm and personality. The autumnal shades of oranges, greens, and browns lend themselves well to the era, and the gameplay is well tuned.

You use your analog stick to move around, A to interact with most items (besides bodies, Y to pick up bodies, ZL to activate cleaner sense (allows you to scan the map for bodies and items of interest), and ZR to activate the vacuum used to clean blood away. 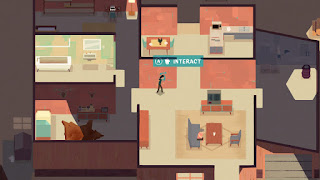 Serial Cleaner is a stealth puzzle game that tasks you with recovering dead bodies, cleaning up puddles of blood, and collecting evidence at brutal crime scenes, usually populated by enemies of the local organized crime syndicate. iFun4All has even scattered collectibles throughout the levels that will net you clothes changes and bonus contracts to extend your gameplay experience. Hiding these collectibles around the stage adds replayability, and as is usually the case, adds to the difficulty of the game.
The game has a fair amount of difficulty, but there are a few things that make it somewhat easier than it could be. For one, finding a hiding spot instantly stops your pursuers from looking for you. Obviously this isn't unique to Serial Cleaner (I'm looking at you, Grand Theft Auto series), but it can be immersion breaking for some. If you repeatedly get busted during a contract, the location randomly places the bodies around the crime scene again. Sometimes this makes it easier, sometimes harder. Collectibles and evidence don't have to be located again on a body moving fail, but if you don't complete the contract before shutting the game down, you will have to find the evidence again.
One minor gripe that I didn't address before, is that if you walk away from the game and come back to it from a fresh load, you have to watch the opening cinematic that sets up the contract again. No big deal, because it lets you experience the world with the story and characters fresh in mind, but it would be nice to have an option to just skip that portion and start at the contract itself. The world is well fleshed out by having pop cultural references in newspapers delivered to your door step, and by having your mom prompting you to watch the news or latest television show with her. It's a nice touch, but the story and characters are mostly inconsequential, since the game is really all about the stealth puzzles. 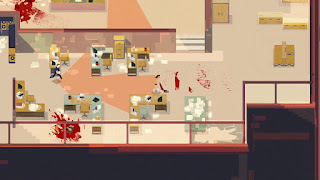 How does the game run on the Switch? Perfectly. The controls feel very intuitive, and zipping around the stages cleaning up blood with the vacuum is much better on the Switch's joycon than with mouse and keyboard. HD Rumble is utilized in the game to enhance the experience. When you get busted, which is shown on screen with a cop whacking you with a nightstick, there is an intense rumble. When you pick up and drop a body into your car or out of a window, you get little rumbles simulating the action of picking up the body and the thump that would accompany dead weight.
I feel like the vacuum cleaner not having HD rumble was a missed opportunity, as it doesn't even activate the motors at all, so I'm hoping for an update that patches that in for the future.

In my original review of the game, I pointed out that the gameplay may get a little tedious during long play sessions, and that it would be well suited to the Switch's pick up, play, and then suspend and go style of accessibility. While it is true that being able to suspend the game and later jump back in instantly does make the game a better experience compared to the PC, I actually found the gameplay itself less tedious because of this. I've personally never been one to game on PC, but when I did it tended to be long haul simulation games. Things like Sim City or Civilization. A game that you will be investing hours on end into. Serial Cleaner is a quirky puzzle game best suited for short play sessions, but addictive enough that those short play sessions can turn into an hour very quickly. Puzzle games have always been a better fit for handheld consoles, and so Serial Cleaner really shines on the Switch because of this. I love this game more each time I play it, and cannot wait to get into the bonus contracts. This is the best version of the game.