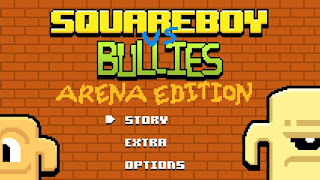 Squareboy vs. Bullies Arena Edition is a classic style beat em up. You begin the game as the titular Squareboy, a tiny kid that gets beat up by bullies at school. No explanation is offered, and the bullies laugh and run away as you pass out. Upon passing out, a mysterious sensei shows up and tells you that to overcome the bullies, you must be brave and train. You train by running through the dojo beating up dummies that pop out of the floor, all the while you get instructions on how to perform different moves using button presses. 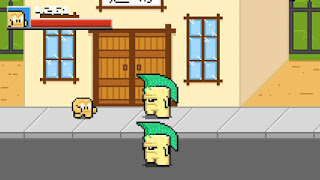 Your basic actions are moving with the dpad (direction buttons on the joycon), A to jump, and B to attack. X will pick up any items that are lying around, like health packs or weapons. Health packs replenish your health immediately, but you need to press B to use the weapon. As you can pause the game at any time to check out the combos, there's not really much of a need to go into depth about them here. Needless to say, it'll be worth checking out what they are and getting better at them to make the game more enjoyable, and add depth to what can actually be just a jump and punch button mash at times. Oh, and the dash attack. The dash attack will help you get away from enemies that have started to group up. 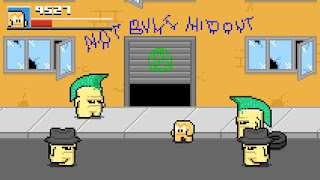 The game's old school aestethic serves it well, as it looks like a 16 bit era beat em up, and controls like one, too, for the most part. You will be happier if you use a controller with a proper dpad while playing, but unfortunately there aren't that many options from Nintendo themselves. The game is playable in handheld mode and with with joycon, but some of the combos can be a bit harder to pull off. There is some cool music to be found, even if none of it is super exciting or particularly memorable. Hit detection is great, mostly. The only cheap part of the game is when three or more enemies gang up on you at once, it is really hard to break free, as you will usually be bounced back and forth between them for a little while before being able to even make an attempt at a breakaway, although this problem can be solved by playing local co-op.

Local co-op is really where this game shines, but that is usually the case when it comes to beat em ups. It's worth picking up at the reasonable price of $4.99, especially if you have a readily available player two.