Stick it to the Man (Switch) - Ramblin' Review 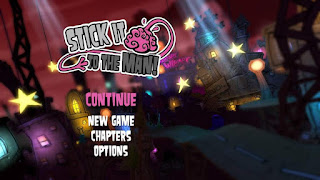 Stick it to the Man is Zoink Games' first release for the Switch, and this is a game that really wants to get into your head...and my head, and, well, everybody's head. With good reason, too.  The game is absolutely phenomenal, and I regret not having picked it up earlier on Steam. All is well, though, as Zoink has made my wait very worthwhile. More on that a little later. 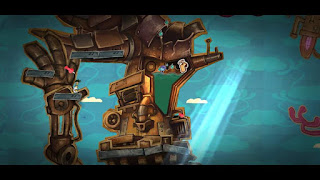 So, as my frequent readers will know, and my new readers should be able to surmise based on most of my review articles having the subtitle "Ramblin' Review", I sometimes like to go on a tangent based on the game I'm discussing at the moment.  So, a few years ago I discovered a new podcast centered mainly on Nintendo as it released it's very first episode. That show is still going strong today, and can be found here It was the Warp Whistle podcast, and midway through the first year, they had on Klaus to discuss Stick it to the Man on Wii U, and also talk about Zombie Vikings, which was releasing soon. I had never played any of Zoink's games at this point, but the humor and art style kept being brought up, and I knew that I had to find out more. Suffice it to say, I started looking up the screenshots and gameplay videos of these games and I just fell in love. It made me want a Wii U at the time, just for Stick it to the Man. You cab listen to that podcast here 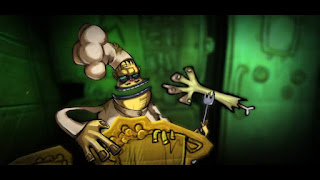 Back to the game, with story by Ryan North. In Stick it to the Man, you play as hard hat tester, Ray. While walking home from work one day, you experience a horrible accident. When you "wake up" in your own coma, you discover that you have a pink spaghetti arm coming out of your brain. With this punk spaghetti arm, you can reach out to the minds of others, and wrap your noodly fingers around their brains to read their thoughts. In doing this, you are able to sometimes coax stickers out of people that can then be used to solve the various puzzles that you will encounter on your very strange journey. 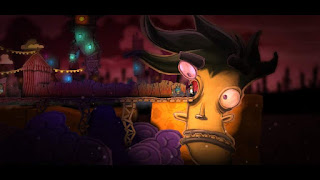 You traverse through the stages by platforming in the traditional way, but also with the aid of your pink spaghetti arm, which can also be used to grab push pins in strategic locations. All the while, you'll be solving other people's problems, while avoiding the mafia toughs that are looking to catch and kill you. 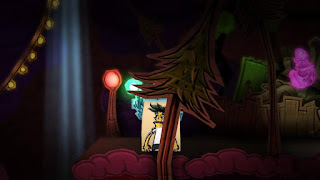 Traversing the stage and reading minds leads me to one of my favorite things about the game - how well executed the HD rumble is by Zoink's team. When you spring from platform to platform, the motors make a satisfying "boing" noise that can also be felt. When you reach out to touch a mind, the controller pulses in beat with the animation. It does so much to bring this dirty cartoon world to life. To go along with all of the other great artistic decisions surrounding this whimsically crafted grit fest, we have one of my favorite checkpoints of all time- a sheet rolling printer. If you die, you get printed out whole by the sheet roller and continue on your merry way.

Stick it to the Man blends the puzzle platformer genre well with the old school point and click adventure games. They tell you a story using every media at their disposal- the narrative, the art style, the thoughts of random passersby and innocent bystanders, the music, and even the controller through the rumble feature. The puzzles are intuitive, and the game just flows so well. It is a very hard game to put down once you get going.
Yet again, the great work done with the HD rumble has me yet again calling the Switch release of the game the preferred version, and every Switch owner should own this game.