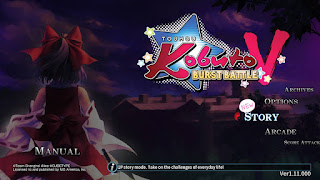 Touhou Kobuto V: Burst Battle is...a third person fighting game with a story wrapped around it. I'm not entirely sure what that story is supposed to be, as it starts off not being very interesting, and it becomes obvious after your first battle that the story isn't really that important to the game itself.

While I love my story-driven games, it obviously isn't a necessity for every game ever made, and some games actually hurt themselves by trying to emphasize a throwaway story too much. I don't really feel that this was the case hear...but I also think that the game's biggest problem is that the meat of the game (third person 3d fighting), is incredibly boring. 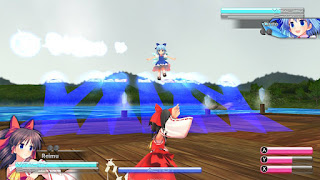 In story mode, you progress from one bland battle to another, encountering the different cutesy anime girls featured on the cover, and then trying to destroy them with inconsistent ranged attacks and melee attacks with inconsistent hit detection. Remember going to rent a game from the local video store as a kid, and you picked up some obscure game that you had never heard of to give it a go, and then got home, only to be disappointed in the low quality and be forced back into only playing mainstream games with high review scores? That's this game.

It's a 3D fighting game with a fixed third person camera, and that makes it very hard to see where your opponent is at times. Even when you can see them, that aforementioned poor hit detection makes it a very unenjoyable experience.

Not only is the hit detection poor, but the animations are slow, and the graphics look like they're pulled straight from the PS2. That might actually be the game's biggest problem- it feels like a relic. Shovelware from a system long gone, plucked from the pits of obscurity and thrown fresh on to our shiny new consoles. 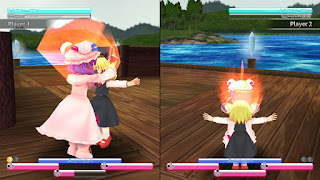 The game's one redeeming feature, is that it has local split screen multiplayer. It isn't horribly well executed, mind you, but it is fun to play against someone sitting next to you for about 15-20 minutes. I also know that had I rented this game when I was teen, my friends and I would have most likely spent the entire night battle each other in the game, anyways, and so it's hard to dismiss this completely out of hand, because I suspect that it could easily happen again for teenagers of this generation.
This is the game you rent when everything else is checked out at the local store, or you buy as your free game in a "buy two, get one free" sale to put on your shelf.