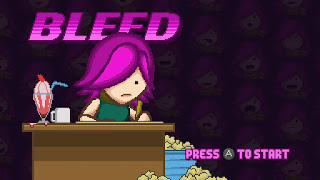 Bleed is a high-style, fast-paced action platformer with an interesting control scheme and great attention to detail. Originally released as part of the Xbox Live Indie Games program, it later came to Steam, and has now arrived on the Switch via publisher Digerati.

Bleed has good level design, and brings a lot of new elements to the action platformer experience that we might normally associate with other genres. For one, it uses a control scheme that is better associated with twin stick shooters. You move around with the left stick(or direction buttons), but rolling the right analog stick around fires your weapon in the corresponding direction. You press ZR to jump, hold ZL to enter slow motion(bullet time) mode, which depletes your time meter, and cycle through your two weapons using the shoulder buttons.
The bullet time allows you to get your bearings and manage a large hoard of enemies when they start filling the screen or coming from all directions. This is a nice touch that brings a unique experience to the game. 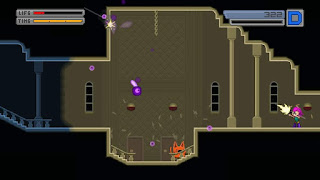 You earn in game currency as you progress through the game, and these can be spent on health bar, time bar upgrades, and faster recharge on your time bar. In addition, you can purchase new weapons and unlock other playable characters(these are unlocked by completing the different game modes with different difficulty levels). During the game, you may pause the game and switch out your two-weapon load-out to better manage your current situation.

You can double jump to help with your platforming, and even aim your double jump to avoid enemies, their projectiles, and obstacles. There is a wall jump, and you're even given the option to turn that off, for some reason. 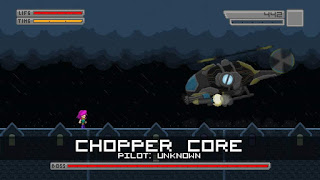 Bleed has a local co-op mode, arcade mode, and the challenge mode that allows you to take on three bosses at once. There is a lot of content for the price tag($14.99), and this isn't just a simple port, as the developers, BOOTDISK REVOLUTION, and Nephilim Game Studios have integrated HD rumble into Bleed. As I've made very clear in the past, I am a huge fan of this feature, and it's use always makes me insist that the best way to play these particular games is on the Nintendo Switch. You'll maximize your enjoyment by playing with separate joycon's, but the feature is noticeable on every configuration except handheld. The larger rumbles register just fine in handheld mode, but you really miss out on the pulsing rumble that accompanies every shot fired with your dual pistols.

Bleed is a fun, intense game, and it provides a challenging experience that never feels cheap. Among another cascade of great releases in the eShop this week, Bleed will scratch your itch for an intense run and gun.