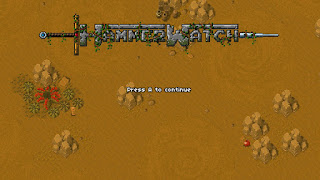 Hammerwatch, much like Nine Parchments, is a callback to classic hack n' slash dungeon crawlers like Gauntlet, but is much simpler in it's execution. It plays out much like many modern rogue likes without being one itself.

The game controls well, and while you have a couple of options for classes, they really don't play out much differently in single player mode. While playing multiplayer, you will notice that having different classes balances the game's difficulty a bit better, though. The game walks this really fine line between tedium and enthralling, somehow. 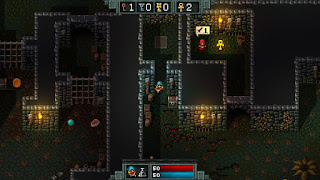 While the core game itself is rather repetitive, and overly simplistic, you will still find yourself coming back for more on every death. When playing alone, every time you die, you will be transported back to the beginning of the level, but all of the enemies that you've defeated so far will be gone. This makes it easier to progress further into the level this time around. Unfortunately, the game has a very drab art style and the levels all start looking the same. As a result, it sometimes becomes more difficult to proceed after a death because you have to remember the exact direction you need to take to get back to where you were before. It would be a huge improvement to the experience if you just spawned where you fell.

As you play the game, you find gold pieces, and these can be spent on character upgrades. Fortunately, these character upgrades stay with your character and save file over multiple deaths. So, even if you don't make any progress through a given floor of the castle, you will still start off with upgraded health and magic points. This of course makes it easier to wipe out your waves of enemies on subsequent play throughs. 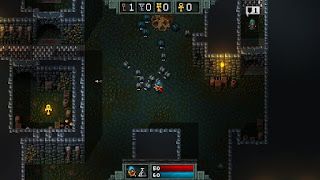 Hammerwatch is a fun game, most of the time. It doesn't lend itself well to longer play sessions, however, because much of the action itself is finding a strategic spot to stand in, and then spamming your attack button while a wave of enemies streams into your whirling blades. If you start to become overwhelmed, you can use your special attack to clear a bit of space. There is a bit more fun to be had in multiplayer with friends, but it is still more of an updated version of the classics without doing anything too new or interesting.

It is an okay value for the price, but better to wait for a sale...unless you need some mindless hack n' slash to play with friends. The game isn't really a big challenge, but you will often have to start over due to having so few lives to work with, just like the olden days. I personally would have preferred the game to offer more lives, but I'm also a bad gamer.