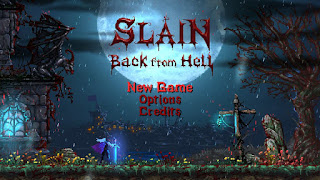 Slain: Back from Hell is a brutal tribute to action platformers of days gone by. While it might immediately call to mind Castlevania from screenshots, it doesn't really feel like a Castlevania clone, and that's a very good thing. While they are both set in bloody, gothic worlds, and you fight grotesque monstrosities in both, the similarities end right there. The pixelated graphics bring a nice aesthetic to the player and enemy sprites, and make the world seem that much more demonic. Smooth, modern animations prevent the game from looking outdated, and bring a nice fluidity to the combat. Plus, it has one of the most bad-ass heavy metal soundtracks in a video game.

Slain: Back from Hell is a challenging action- platformer that puts you in the role of Bathoryn. Bathoryn is a warrior resurrected (unwillingly) by the gods to combat an evil that has seemingly returned to the land after being put down by Bathoryn before. As is usually the case with side scrollers, you make your way from left to right, avoiding traps and hacking down enemies along the way. 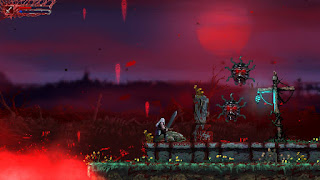 The level design is on the simple side of things, as it really puts the emphasis on combat and trap avoidance, but it is still very well done. Much of this is due to the fact that the original game was very poorly received upon initial release, so the developers went back to work and updated the game to be a better experience. You will not be able to just move forward and swing your sword to progress, and will often find yourself waiting for platforms to come to you, and hacking apart enemies while doing so.
Enemies have a nice bit of variety in their design. In the first level you'll encounter werewolves with blade arms (and a larger werewolf with blade arms as a pseudo-tutorial on tactical blocking), wights that hurl ice balls at you, fire-breathing gargoyles, floating snake heads, and a bloody skeleton executioner come in the first level, alone. 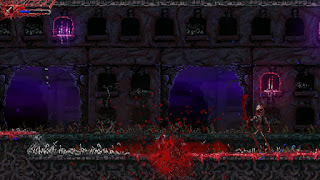 An interesting thing about the game is how involved the combat can become for a throwback to action platformers of the eighties and nineties. You have a standard melee attack that is a three hit combo when pressed in succession, a mana blast, and block. You can charge your melee attack for a critical hit, but you must time it correctly, or it does nothing. You can charge the mana blast a little bit and get a slightly stronger beam, but it takes more of your mana away. With fully charged mana, you can crouch and unleash a super powerful magic blast. If you time your blocks right, you can temporarily stun your enemy. With proper timing, you can even bounce a projectile back at your opponents.
We learn all of this through onscreen prompts that tell you what is possible, and then leaving it up to you to practice these moves as they are suggested. I suggest practicing. A lot. Have I mentioned that this game is difficult? It is. 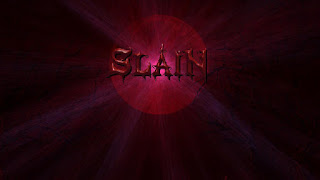 This difficulty is the right kind of difficulty, however. When you die, it's a learning experience. You learn why it is important to block. You learn why it is important to utilize your short mana bursts to give yourself a little bit of distance to plan an attack without getting overwhelmed. You learn why sometimes it is better to not try that perfectly timed critical strike because it still takes too long compared to your opponent. You learn where the traps are, and how to avoid them. The above screenshot is what you'll see every time that you die, and if you're like me, you will see it...a lot.

If you are looking for a challenging, and bloody action platformer, Slain: Back From Hell is exactly what you need. If you don't like your games to make you want to break the controller in frustration, then this isn't for you.