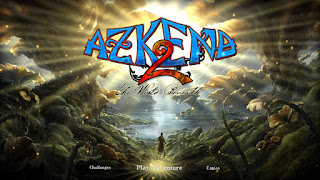 First of all, Azkend 2 brings a refreshing take on a puzzle game by having a storybook like narrative. Taking place in the nineteenth century, you and your party set sail across the Atlantic Ocean from Liverpool, bound for New York. On your travels, you encounter a gigantic storm that takes your ship to an unknown land. You are then tasked with completing puzzles in a time limit. Each puzzle rewards you with a piece of the item that you are looking for that will assist you in your journey. Once you complete all of the match three puzzles in a chapter, that object acts as a new special tile with it's own unique ability. You will also be met with the occasional hidden object bonus level to help you progress the story. 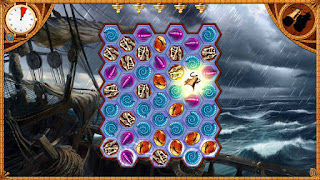 Another way in which Azkend 2: The World Beneath is a unique take on the genre, is that it is the first of it's kind that I remember having encountered. Instead of switching your pieces around on a grid, or shooting marbles at other marbles, your pieces (in this game, fossils and sea creatures) are all laid out on a grid, and you must draw a line between at least three matching ones to make them disappear. If you manage to connect six or more, it will spark electricity from the Tesla coils at the top of the screen, which will eliminate random pieces around the board. In addition to the special pieces mentioned above, there are other pieces that will act as obstacles you need to overcome. If you run out of time, the whole grid comes crashing down, and then merely asks if you would like to try again. The biggest drawback here is if the level began with a tutorial, you will have to sit through it every single time. Fortunately, this shouldn't happen too often in the earlier stages.

The difficulty comes gradually, and is quite fair. It starts to get frustrating towards the end, so it is important that you try your best to continue utilizing those Tesla coils and any other power-ups or special tiles that you get. One cool special tile is the compass, which is a wild. Even better? It doesn't even have to match up with the same shape! Go from a shell, to the compass, to the shark tooth!
The hidden object games didn't really interest me all too much, but they were a nice change of pace and were usually pretty quick to get past. They worked it well into the theme of the game, though, so I do credit them for that. 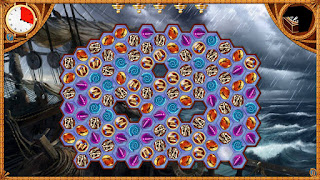 Azkend 2: The World Beneath really calls to mind the characters found in such classics as "20,000 Leagues Under the Sea" and "Gulliver's Travels". As such, it naturally has a soundtrack that would feel very at home as the scores for movies based on these properties. It even brings that sense of wonder and adventure of those stories as we work our way through the 17 chapters.

It does end up being a little on the short side of things for a puzzle game, but it's 8-ish hours can be supplemented by doing timed challenges against a leader board populated by Jules Verne, some characters from his novels, and real life seamen. There are also challenges where you earn medals by completing the story levels in half the time.

Again, 10 tons has provided puzzle game fans with hours of entertainment for a great value, and I'm a bit sad that we aren't far off from the end of the publisher's blitz of titles being ported to the Switch.