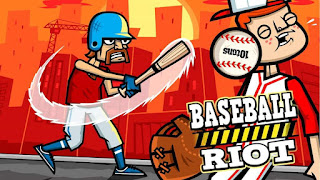 Baseball Riot is a physics based puzzler released by 10tons. It is the sequel to Tennis in the Face, and the story is just as ludicrous. You play as Gabe Carpaccio, who is upset over the fact that his former team has been sponsored by the corrupt energy drink corporation Explodz, so he is out for bruises.

With 10tons rapid release schedule for the Nintendo Switch to get all of their games ported over before releasing their upcoming new title Tesla vs. Lovecraft, we get the odd situation in which many of us, myself included, are playing the sequel to a game released less than six weeks from it's predecessor. With that in mind, how does the sequel stack up against the original? Do we have a home run, or a strike out? 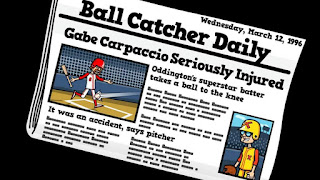 Whenever a company releases a sequel, we as fans expect them to have taken what we appreciated about the first game, and to add on mechanics and features that improve upon the original. Baseball Riot knocks it out of the park in this regard, as they bring back the absurd storyline, cartoon graphics, and well balanced physics of the first. They then take all of those elements, and layer more difficult gameplay and a balancing mechanic to mitigate the game from straying too far into frustration territory. This balance is achieved through providing an extra ball to achieve your goals if you manage to knock out three enemies in one go. This skill needs to be mastered in order to get around the trickier levels, and is a welcome addition. 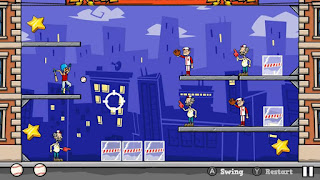 Also returning is the highly addictive gameplay. Every time I booted up the game, I found myself lost in it for much longer stretches than I anticipated. They've also added a fresh take on the three star scoring system often found in physics based puzzle games, in which they make you collect the stars around the level instead of merely just rewarding you for completing the puzzle with fewer tries or racking up a high score. This adds a nice feel of collectibles to a genre that usually sticks hard and fast to it's own conventions.

My only drawback is the continued absence of HD rumble integration into the gameplay itself. With different ways if interacting with your environment, this little addition would bump up the experience a bit.

I've loved taking this trip through 10tons' catalog, and can't wait to see what they come up with next.