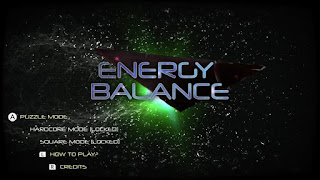 Energy Balance is a puzzle game based on mathematical cross-equations with a light narrative that plays out in between puzzles.

Your spaceship gets caught up in some kind of previously unknown anomaly that shuts down your engines. To get them back online, you must rearrange tiles with positive and negative integers that add up to the number specified at the end of each column or row. Just like in sodoku, each tile  can affect the row and column that it is placed into, so it also becomes a test of your deductive reasoning skills. 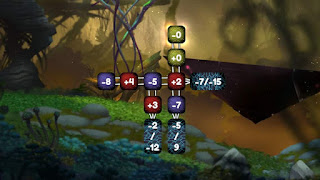 Energy Balance eases you into the mechanics of the game by making the first few puzzles relatively easy. There are only one or two overlapping row- column combinations, so it is a bit more forgiving while you find your footing. At the start of the game, and in between puzzles, there is some dialog between the captain of the ship and it's cat. These interludes add a bit of personality to the logic problems, and give you a short mental break from staring at numbers and working out the best way to arrange them in the appropriate configuration. 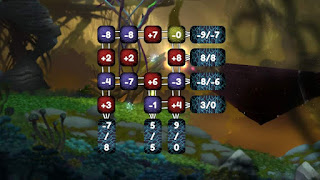 Unfortunately, these small breaks don't do enough to prepare you from the rug being violently yanked out from under your assumed to be stable stance as the difficulty ramps up greatly from the introductory levels. The developers try to mitigate this in three ways. First, they include a row or column that only consists of one sum. It's a nice thing to have a little bit of a "gimme" when factoring your way around the board. Next, they sometimes include a free space that isn't integrated into the sums that you can easily use to swap out unwanted tiles. Thirdly, the puzzles are randomly generated, and you are given the option from a pause menu to restart which I thought was just going to reset the puzzle, but instead generates a new one entirely. Often, I found myself getting to a particularly difficult puzzle and utilizing that restart feature to find one that was more manageable.  Even then, I still felt as if there were a few missing steps in between "tutorial" and "brutal".  It could just be that I am not quite up to speed with my former ability to solve number problems, but when I went searching various forums, I didn't seem to be alone. There were many requests for guides and help.

The game does boast an amazing soundtrack, and so your ears get to enjoy themselves while your brain melts away. The art style is suitable for the setting and helps to bolster the atmosphere during cutscenes, but the graphics during puzzle solving are rather bland. The cat somehow managed to be adorable despite it's haggard appearance, whereas the tiles and layout remind me of the original Playstation's CD player app. It is a situation in which I feel that the puzzles may have been more enjoyable if the tile designs had changed between levels, as the lack of variety leeches away some of the sense of accomplishment when you can't remember if you're working on a new puzzle, or are still stuck on a previous one. 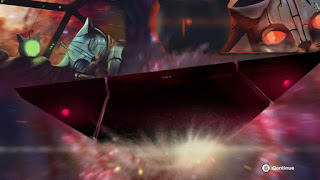 If you're a math wiz or enjoy a challenge (there's even an unlockable hardcore mode!), then Energy Balance is a great budget puzzle game for you. Otherwise, you may want to brush up on your sodoku and logic skills before jumping into this one. If you're not a fan of numbers or math, you aren't the intended audience. I also feel that this will be a game that grows on me the more I play, and that assumption plays into the tagline- easy to learn, hard to master.