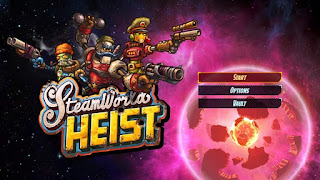 Steamworld Heist: Ultimate Edition is the first "port" to the Nintendo Switch by Image & Form Games. This sidescrolling turn based strategy shooter game was originally released on 3DS(where I initially played it), and later ported to every other platform imaginable. It finds a good home on the Switch, and is the second release on the console from the developer after last year's phenomenal Steamworld Dig 2, which really kicked me into high gear reviewing nindies on this very site. 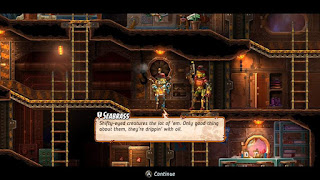 In Steamworld Heist: Ultimate Edition, you play as steambot Captain Piper Faraday, a smuggler and sometimes pirate. You go across a steampunk galaxy recruiting steambots to aid you on your mission to loot enemy spaceships, primarily those controlled by the vile pirate steambot Scrappers, whom you are also trying to get under wraps. All of these steambots have their own charm and class with a specific skillset that will assist you on this quest. 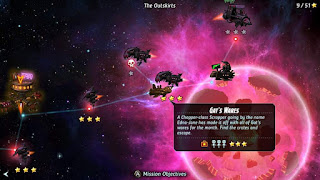 Mission objectives range from the basic "defeat all enemies" to "gather this specific item". There are side quests to complete to help you make your party stronger, and these also serve to aid you in finding upgraded weapons and other items. During missions, you will be recovering barrels of water that act as your currency in the game, and these enable you to purchase the aforementioned weapons and gear. You may also upgrade your number of inventory slots to improve your load-outs before missions. There are also a lot of different hats that can be found and unlocked to customize your bots. 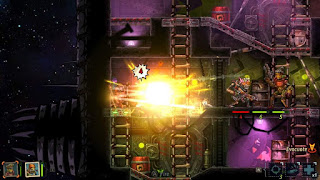 Many of the game's features and mechanics will be familiar to any seasoned veteran of turn based strategy games, but what really makes the game shine is it's attention to detail and lovable characters. These colorful characters can be found in not only the protagonists, but NPCs and enemies, as well. Another great feature is the ricocheting bullet mechanic that kind of lends a physics puzzle game element to your shots. This helps you take out those baddies hiding behind cover or situated at just the wrong angle for a straight-on shot.

Each ship that you board is procedurally generated, which helps when taking on the new game plus to make the experience feel a bit more fresh than just retreading the same old ground again.

As I alluded to earlier, this isn't merely just a port of the previously released game, as it also includes the "Outsider" campaign. This campaign features missions, upgrades, and hats previously only available as DLC. Image & Form have also taken special care on ensuring that the game is optimized for the Nintendo Switch, and have included touchscreen controls in handheld mode. I only wish that they had added in HD rumble support, as there could be a lot of fun interactions with the bouncing bullets.

Image & Form have done a great job in building their steampunk universe populated by robots, and I can't wait for their next entry in the series. It also helps that the game really reminds me of Worms, for some reason.