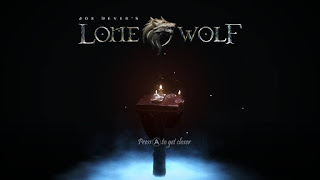 Joe Dever's Lone Wolf for Nintendo Switch is a new take on the visual novel genre that incorporates some light puzzle elements and a quick time event based combat system. While Telltale Games’ library consists of somewhat similar mechanics, Joe Dever's Lone Wolf eschews the interactive movie style present there in favor of a more classic approach- you actually read an onscreen novel, and are occasionally confronted with a choice that influences the story moving forward.


The Lone Wolf series got its start back in the early days of Dungeons and Dragons when Joe Dever was writing scenarios for the venerable father of the fantasy roleplaying game system, and eventually became an even more interactive version of the then popular “choose your own adventure” series of children's books. You started off your adventure by creating a character with die rolls, including having a randomized weapon and starting inventory and gold. As you progressed through the story, you gained experience and items that could carry on from one book to the next, and it added a new level of depth to an already exciting style of narrative that put you in charge of how your story played out and ended. The series began in 1984, and lasted for 32 books. While it saw some popularity in its time, the series received a second wind when it was reprinted in Europe decades later. Joe Dever contributed to the creation and continuing materials for the Lone Wolf Role-playing Game, and was working on supplements for it upon his death in 2016. He wrote the contents of this game for its original development in 2013, when it was being developed for tablets. He was also working on the conclusion of the core series, and his son announced after his father's death that their family was working on having the final three books published. 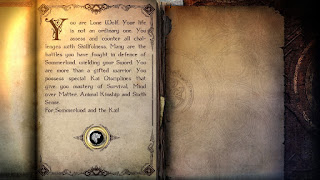 So, after finding success on tablets, Forge Reply has ported Joe Dever’s Lone Wolf to the Nintendo Switch for a brand new audience to enjoy. The game makes a lovely transition to my latest favorite console, and it is a welcome addition to my personal library. While the presentation is certainly not for everyone, new and old fans of the series alike will find much to enjoy here. As Joe Dever was probably aware, most of the audience of his original series were now grown, and so he made sure to include a darker edge and more mature themes to the story, so that it has grown up with its target audience. While the writing was already superb to begin with, it has taken on a more advanced vocabulary and deeper moral choices to accommodate the older crowd. It no longer feels like a book aimed at teens, but instead takes into consideration that new readers are coming off of George R.R. Martin's high fantasy epic.


You begin the game learning that you are the last remaining Kai Lord, and your territory has come under attack from an unknown force, and you must venture into your realm to solve the mystery and confront the horde. After this, you are given a number of choices relating to your chosen class and abilities. These abilities will influence which choices are available to you throughout the story, and will help or hinder you, depending on the situation. This system is very flexible in helping you customize the experience to your personal preferences. I loved the fact that I wasn't forced into a specific skill set based on my starting class. Incidentally, I chose skills that were primarily helpful with dealing with NPCs and overcoming obstacles outside of combat. This made combat itself a little more difficult, at first, but thankfully upon failure in combat, you can start the fight over and try again. 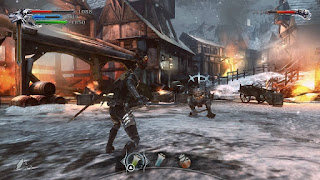 As I mentioned before, the combat system is a blend of a traditional turn based system that reminded me of the active battle system from the Final Fantasy series, coupled with quick time events to enhance your attacks. Failure in battle can often be overcome in subsequent tries by better timing your button presses, but if a particular fight is giving you trouble, you are also given the option to call upon your goddesses mercy, which sets the difficulty to easy for that one fight. I never ran across a situation where this became necessary, but Joe Dever's Lone Wolf is primarily focused on the story itself, and how your choices will affect the outcome in the short and long term. As such, those who wish to choose this option shouldn't feel too bad, since the combat more or less just helps break up the narrative and give you something to do in between pages of text and solving puzzles. Fortunately, the combat system is engaging and enjoyable, so it never feels tacked on. As I built my character as a somewhat more combat proficient rogue, I was not trying to make my run through the game too heavy on the combat side of things. However, because of the choices you can make regarding your skill set, if you want to make combat more of your personal bag, beefing up those combat skills will make you more likely to choose a more dangerous path as opposed to the stealthier approach that I chose. 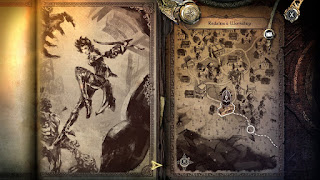 This deep customization set allows for multiple playthroughs where you can choose to play through an entirely different path each time, and that's one of Joe Dever's Lone Wolf's biggest strengths. The replayability greatly increases the value of the game, but it's initial 15 or so hour story makes it worth the price of admission alone.


If you grew up on the series, or are just into choose your own adventure stories to begin with, than Joe Dever's Lone Wolf is an excellent addition to your library. If you don't play your video games to read much more often than play, than it might not be the right fit for you. Not withstanding personal preference, I honestly feel that this is a must own, and every bit of this game lived up to my expectations, and more.