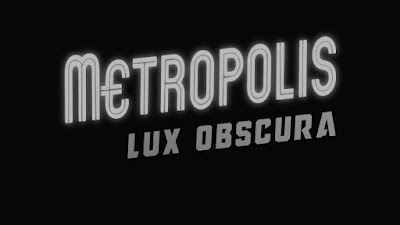 Metropolis Lux Obscura for Nintendo Switch is a mashup of visual novel style games with an interesting gray scale comic book style reminiscent of Sin City, matched up with a match three puzzle game for combat. It's an interesting idea for a game, and the core game itself is well executed...for the most part. 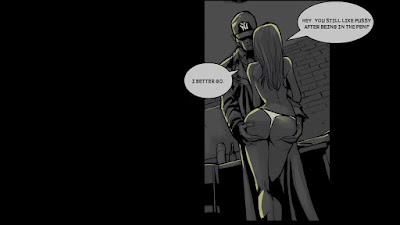 However, the most interesting content can be found in the gory violence found in the story, and the full-on nudity and other sexual situations on display. The premise is that you are a falsely accused cog in an organized crime family, and you're just getting out of jail for the murder of a man that was sleeping with your ex. Your goal in the game is to track down the real killer, and you take on jobs along the way to earn money and find clues. You reluctantly accept the jobs given to you by the local mob boss, and of course you end up in way over head. This type of gritty story telling full of adult themes is a strong indicator that we are dealing with a new Nintendo when it comes to games allowed on the Switch. While there have been a few other games that hint towards Nintendo permitting more controversial content on the console, this one really cements how far we have come since Nintendo was censoring revealing costumes for protagonists in a Teen rated RPG, and the removal of a petting mini game in it's own Fire Emblem franchise. Metropolis Lux Obscura features full frontal nudity, drug use, and sex scenes throughout. My hope is that this may finally point to a non-butchered localization of Mother 3, which is far more tame than anything found here. 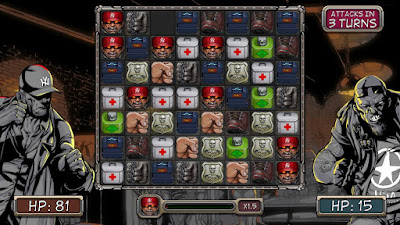 Back to the gameplay itself, however. While you are playing through the story, you are sometimes given multiple options as to which location you go to. Where you go at what time can influence how the rest of the game plays out. This adds an interesting bit of replayability, and Metropolis Lux Obscura isn't a long game to begin with, so it's a nice added touch, but more often than not I found myself pushed to one location only. When you get there, you get into a fight. To beat your opponents, you have a grid of puzzle pieces. Match three or more to perform an attack, regain health, increase your rage meter(which buffs damage), or take damage if you catch heat from the police. You level up after a fight, and can increase the effectiveness of your medkits or attacks. The more like tiles you strong together, the more effective it is. The biggest problem the game has, and it seems to be common, is that every so often the matched tiles will disappear, but none will reappear, which breaks the game. While the game autosaves after each location you visit, and you can simply close the game and reload from your last save and proceed as normal, it is still a very annoying setback when the tiles come up in a random order and you end up getting "dealt" a bad combo that makes it much more difficult than the run you were on when the glitch occurs.

The story is intriguing, if tropey, and the gameplay is fun, when it works, but that looming glitch makes it hard to justify a purchase until a patch has been made to address the issue. Another plus that I'll note is that the English voice acting in the game is actually pretty solid, which helps you become better immersed in the story. 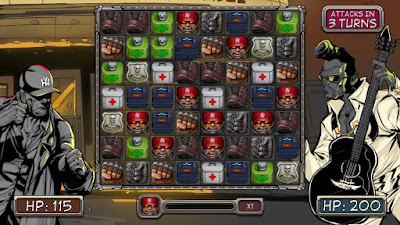 Overall, Metropolis Lux Obscura has a lot of fun ideas and it's adult content is a refreshing breath of air for more mature gamers, especially because it is very uncommon to find such material in a puzzle game...but until the above mentioned issue is fixed, I would wait for a sale and bring a lot of patience. Even so, the game is enjoyable to play as long as you go in knowing that you might have to replay levels from time to time.

6/10
Although if the patch comes soon, I would easily score this an 8.