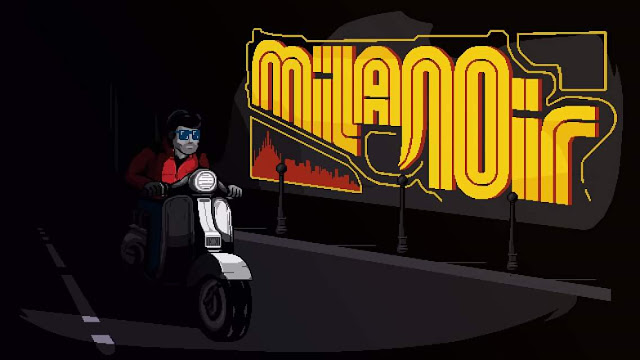 Milanoir is a seventies inspired mafia shooters that leans heavily on the sights, sounds, and tropes of the era. While rendered in pixels, the sprite based art conveys grimey seventies crime movie incredibly well. Does that atmosphere hold up with the gameplay? 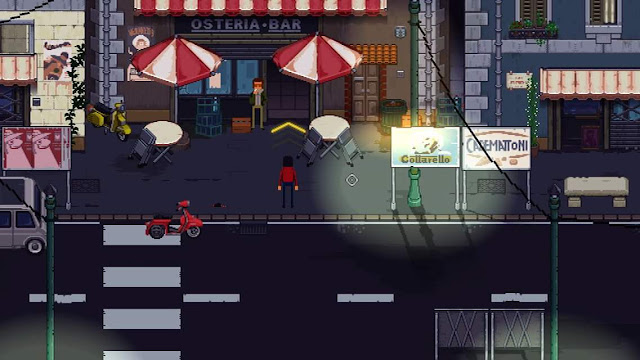 First of all, Milanoir has very heavy adult themes. As you could guess based on the title, it is based on crime movies, and takes place in seventies Milan, Italy. Instead of playing as a grizzled detective, as is usually the case in many noir- inspired games, you are a hitman for the mafia, and as such you'll be doing a lot of killing. While there are some more stealthy moments to be found, usually you'll be running or driving around mowing down rival organized crime types as you work your way through the story. Our game begins with a failed attempt on your life, and you pay back this attempt in kind by shooting the would be assassin and stealing his cool sunglasses. After that, you make your way back to your boss, who reveals that he knows who must be calling the shots behind the price on your back, and it is a local rival gang boss. Your boss then tells you who you must hunt down and where she can be found. There is a lot of blood, swearing, and since you find your mark at a brothel, some sex and nudity to cap it all off. After sneaking your way through the brothel, you, along with an escaping whore, confront your target and a clever boss fight ensues. The cops show up when you get her down to a fraction of her life, and this leads to the first car chase scene of the game. 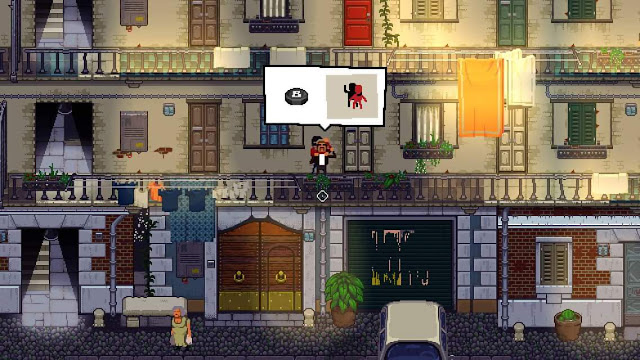 You will now be bobbing and weaving your way through traffic, meanwhile trying to avoid taking too much damage and shooting down the cars and bikes in pursuit. While the car chase scenes are at first exhilarating and a nice change of pace, they are definitely the weakest part of the game. The soundtrack switches between laid back funky soul tracks and intense heavy rock suitable for the era. It all feels exactly as it should. The atmosphere provided by Milanoir's visuals and soundtrack are really what set it apart from other twin stick shooter games.

Aiming feels incredibly floaty, but you can adjust the sensitivity of the cursor in the menu during the game, and there is an auto aim feature that can be enabled to help smooth it out a bit. As I mentioned before, there are some stealth elements where you prevent those on watch from alerting others of your presence, and this is well executed by sneaking up behind them and mashing the B button to choke them out. While you're shooting, you can take cover to avoid fire and regain health. Mastering the stylish roll seen in every buddy cop movie will be the difference between success and a quick death. There are other elements that you can incorporate into the fights based on the environment that keep things fresh, but sometimes the missions feel like they're going on a bit too long. You'll also have to manually reload on the fly, but shooting is done with ZR, and reload is mapped to R, so it's just a matter of quickly switching your finger between the two. It's very intutive and works well enough that it feels like second nature by your second firefight.

Thankfully, when things get a little tedious or are a bit too rough at first, there are fairly frequent checkpoints and infinite continues that put you back at the most recent checkpoint. The game definitely flows a lot more smoothly as you progress and get better, but this checkpoint system is very forgiving until you find your feet. 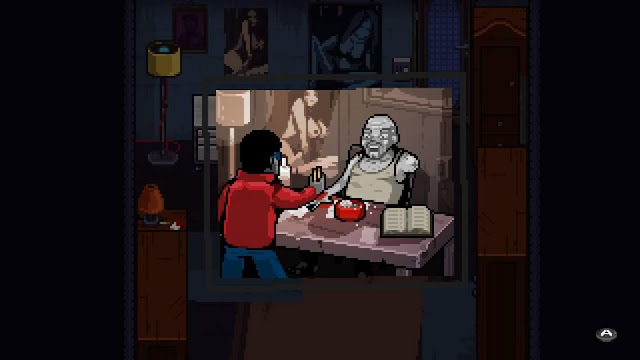 Beyond the annoying driving levels, Milanoir only really finds a weakness in it's (suitably) cliche story, and the seemingly inconsistent hit detection when it comes to cover. Sometimes you have perfect cover from enemy fire, and other times they'll tag you a few times even though you haven't moved. It can sometimes be a little difficult to distinguish between cover objects and background features, but usually when this happens you just hit ZL to roll over or behind if possible. Still, it is a consistent annoyance, and the designers probably could have done more to make coverage areas a bit easier to distinguish.

Overall, Milanoir is a solid twin stick shooter that doesn't emphasize just swinging around in a circle and taking out as many enemies as possible as quickly as possible. You will have to line up your shots and take advantage of ricochets and cover, otherwise you will die quickly and often. While I wish the car chase scenes didn't last as long, I do understand their necessary addition to break up the regular shooting missions, and their flavorful inclusion. If you're a fan of GTA, especially the old school top down shooters, you'll find a lot to love, particularly if you like playing as a foul-mouthed mobster that enjoys dishing out comeuppance to faceless goons.