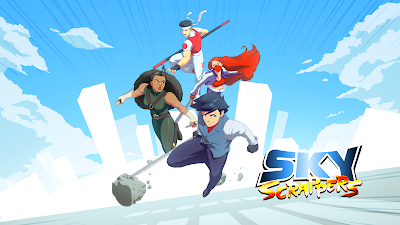 The Nintendo Switch is known for it's currently amazing and ever-expanding library of multiplayer games. Ant Workshop brings us Ground Shatter's SkyScrappers, an arcade style platform fighting game. The game has a few different modes, allowing for local multiplayer and featuring a single player campaign. There are also two different ways to win- by eliminating all of your opponents, or making it to the top of the Skyscraper. You see, SkyScrapper's namesake and gimmick comes from it's setting- a recently demolished skyscrapper has been demolished, and you and a varying number of fighters are participating in a deadly game of ascending to the top of the falling building while fighting off your opponents. There are falling objects that can be used to bounce to a higher level, as well as hazards that can deplete your health bar.

Story mode finds you picking one of four fighters, and then fighting your way through different combinations of the other three while pursuing victory in a tournament. While the game shows you flying to different cities around the world, the stages don't really vary in appearance all that much, and the actual ascent up the Skyscraper is mostly inconsequential. However, there is some fairly entertaining banter between the contestants at the start of each match, and it's worth reading the first time through. Story mode will pit you against one fighter, then two, then three in a match consisting of "best of X" rounds depending on number of participants. I believe that in my first run through of a scenario, the last match against all three opponents lasted for 13 rounds and I barely eked out a victory. By the time I was on my third play through, I had become familiar enough with the controls that fights against the AI became a bit too easy. While there are four characters, they don't really play any differently, and the game's two button scheme doesn't lend itself well to the more complex side of the fighting game experience. You can jump, and you can attack.

Local multiplayer, as is usually the case, will only be as fun as those you can play with at the moment and their enjoyment of the game. My only participants for this particular game didn't really quite jibe well with the simplistic style of the game, and really voiced a lot of dislike for the falling debris that damages you and throws off your momentum. Another common complaint from my co-conspirators (and myself during single player), is that sometimes there will be debris or ledges that you THINK you can stand on, but don't allow you to do so. This resulted in far too many instances of unwittingly plunging to the bottom of the screen while everyone else was moving onward and upwards. The game has a built in rubber banding effect that shoots players from the bottom to the top, but it does so while also putting the rebounding player at a distinct disadvantage, since it's shooting them into the area of attack of their opponents who most likely have a solid platform to launch their attacks from.

SkyScrappers offers a mildly entertaining, but repetitive story mode, and a just fun enough level of entertainment in the local multiplayer. There is no online multiplayer available, and that might have actually stretched out the replayability of the game a bit...but it's absence really hurts the game. I could have seen SkyScrappers becoming some niche group's weekly rental tradition during the early 2000s, at least for one summer, but now it just hits enough notes that you don't regret your purchase, but shouldn't buy unless you have a regular group of local friends to play with.